Church in a post-Christian context 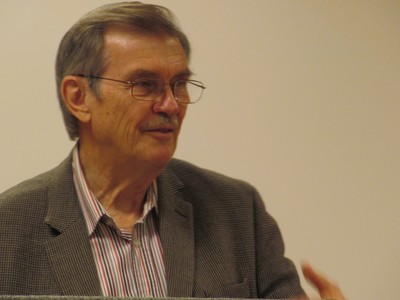 Guder, who was at the forefront of the missional church movement in the 1990’s, told the coaches’ gathering that the term missional became a cliché in record time. “When somebody says, ‘We’re doing missional,’ I say that’s not even English,” he said to great laughter. “Nobody knows what anybody means when they use that term.”

Guder says he and other theologians were trying to figure out how churches could create a Christian movement in our (Western) culture, as they were increasingly being marginalized.  “We were asking, ‘How does the church coming out of Christendom become missionary in our post-Christian context?’”

Guder says the theological group, which he was a part of, began to recognize it was increasingly possible to say “church” and not mean God’s mission. This led to a deepening conviction—new faith communities needed to form, primarily around the theology of the character (mission) of God.

“Missional communities are about God calling together a people to serve God’s purposes in a particular context (neighborhood) to bring healing, reconciliation and good news to those around them,” said Guder. “A missional community is not an end itself. It is not a church that exists for its own purposes.”

Guder spent the rest of the day talking with the coaches about why to start a missional community, how biblical witness shapes one, and what the role of leadership is in its formation.

Encouraging the gathered coaches “to learn the culture of the community and neighborhood” of where they are starting missional communities, Guder said, “Recognize right away that you are not going to change the community, but God is. We have a difficult task. We must understand how we got where we are; it is not due to God’s lack of faithfulness. If a church exists only to meet the religious needs of church people, your vision of church and your gospel is too small.”