Home News From the occupied Palestinian territories to the European Union

From the occupied Palestinian territories to the European Union 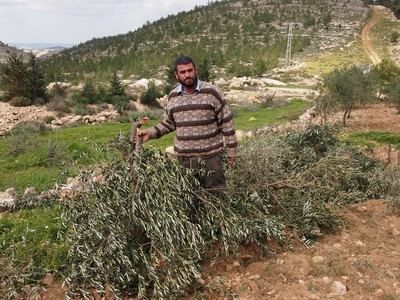 In March this year, Raba Fanoun, from the village of Nahhalin near Bethlehem, discovered that settlers had come to his land during the night with hatchets and destroyed 80 mature olive trees, which his father had planted thirty years ago. This was nearly half the total number of his mature olive trees. The livelihood for his extended family depended on them.

Later that day, volunteers from the Ecumenical Accompaniment Program for Israel and Palestine (EAPPI) Bethlehem team visited Fanoun, to report on this destruction.

“When you plant a small flower in your house,” Fanoun said, “imagine how you feel when it dies. And think about the trees we have cared for, for 30 years.”

“This is a big attack on your livelihood,” I said.

“It’s not just our livelihood, it’s our life,” was the reply.

During my three months in Bethlehem I was often in this village, which is under constant threat from settlements on the surrounding hilltops, including the huge nearby settlement of Beitar Illit.

In April we were called out to witness and report on the military orders left under stones on village farmland, confiscating another area of land for the extension of the security zone around Beitar Illit.

“When you go home, tell people in your countries,” the mayor urged us, “tell them what is happening here. This is the last of the farmland of our village. They want us to leave. They are trying to drive us away.”

As part of a meeting of EAPPI representatives with EU officials in September this year, I was able to tell the stories from Nahhalin to members of the European Parliament (MEPs), permanent representatives, officials from the External Action Service and the cabinet of the commissioner for research.

We showed them a photo of the building activity that we saw taking place in Beitar Illit, right above Palestinian farmland. Such establishments lead to the extension of the security zone, and run-off from the settlement sewage system polluting the Palestinian farmland and water supply.

I was also able to show a photo of Fanoun with his destroyed olive trees and describe the impact settlement has on local people. We told the MEPs what Fanoun and the mayor shared with us.

We also brought to them words of another farmer from Nahhalin: “What they call Area C is actually the future of Palestine.” What most people in the occupied territories shared with us was that “the situation is urgent, if the two-state solution is to have any chance of success”.

For the visit to Brussels I worked as a team with two other former Ecumenical Accompaniers: Jonathan Adams from the United Kingdom and Dominika Blachnika from Poland were EAPPI volunteers in East Jerusalem in 2012. I was in Bethlehem this year and in East Jerusalem in 2012. So we also described the impact of the developments in the E1 area outside Jerusalem on the lives of the Bedouin people we had met there.

This is now a well-known issue politically, but the stories from people living there and the impact of the loss of land, water and access to Jerusalem shows the level of displacement and deprivation.

We linked this with the stories from the Bethlehem villages, where Palestinian people are also threatened by forced displacement. Their farmlands are disappearing into settlement construction, is claimed by the route of the separation barrier, and comes under repeated attacks from settlers.

We shared what we had seen and passed on the words of the Palestinians we got to know during our stay. We shared maps and photos. We shared statistics. We reminded politicians that under international humanitarian law, which the EU upholds, Palestinians have a protected status and settlements are illegal.

EU officials have recently taken steps through issuing EU guidelines on grants and loans to settlements. We hope that our testimonies will encourage them to continue in this direction and take the necessary actions for the resolution of the Israel Palestine conflict.