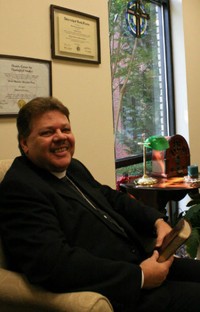 A miracle happened — is happening — at Light of Hope Presbyterian Church in Marietta, Ga.

Years in the making, Light of Hope’s ethos began with three Presbyterian Church (U.S.A.) congregations located within six miles of one another, each formed as a result of “white flight” from Atlanta in the 1960s. They decided to merge into one congregation to better serve their neighborhood.

They hired their first pastor in January 2013, worshiping as one congregation for the first time in March. In the months that followed, they began learning how to get along. Then in August, Light of Hope got a visit from one of their homeless neighbors.

“Max was known in the community; he would stand in lines, getting boxes of food for people he didn’t know,” says Light of Hope’s first pastor, Edwin Gonzalez-Gertz. “He struggled with mental illness. He was tired of churches’ indifference to him. We were the last one he was going to visit.”

What happened next — welcome, acceptance, and a cleansing baptism — wouldn’t have happened without a layer of miracles that began more than three years ago.

In 2010, pastoral leaders from those three Presbyterian churches — Calvary, Southminster, and Woodlawn — put together a vision team of five people from each congregation to determine their collective future.

Early in the process, a consultant asked the vision team, “What is the wildest, craziest thing you could do?” Team member Joyce McMurrain had an answer: “To best serve our neighborhood, we should all sell our properties and start from scratch.”

Nearly three years later, that was the option the team chose.

As the vision team was imaging their future as a better neighbor in their community, Presbyterian Mission Agency (PMA) was working on an evangelism resource, Engage, to encourage churches to do this very thing — to join in God’s mission already present in the neighborhood. 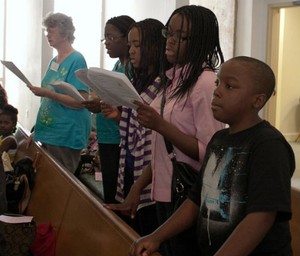 “Engage has helped us realize the mission of our church is more important than structure,” says Gonzalez-Gertz.

Knowing this served the congregation well on the day Max was “giving up God,” on a day when their pastor was out of town.

Before Max walked through Light of Hope’s doors that Sunday morning, the Engage Sunday school class had talked about how their personal stories of faith were connected to the larger story of Scripture, which they were called to share.

They also talked about God’s promise of relationship to help heal brokenness.

“It was affirming to us because we could see how God is in control,” says Frieda St. Germain. “We accepted that wild, crazy idea because we wanted to be in better relationships with those in our community, with people like Max.”

As fate would have it, St. Germain was the first person to greet Max that day. “He said, ‘I need some deep Bible study today.’” Then, he just walked into church, sat down and started talking to people.

“Everyone, including the 70-year-old ladies, was very comfortable with him. I can’t really describe it,” said Pam Jones.

St. Germain remembers sensing the congregation letting go of fear. “We were aware of his mental health issues. As we welcomed Max, the Holy Spirit took hold and something really big happened.”

As Light of Hope accepted Max, his heart opened. Letting go of the rejection he’d felt, Max blurted out, “I want to accept Jesus. Aren’t I supposed to get baptized now?”

“For a moment, none of us knew quite what to do,” said McCurrain. “The visiting pastor asked us, ‘Would your pastor be upset if we did this baptism?’ We all looked at each other and thought, ‘No!’”

“He also asked, ‘What would Jesus have done if someone needed to be baptized—call the disciples?’” said Pat Alverson. “That made us laugh.”

That’s when they felt the Holy Spirit leading them and saying, “This is the thing to do. “It’s the most amazing thing I’ve ever been a part of spritually,” said St. Germain. “It was transforming. I told Max, ‘You have shown me the face of God.’”

Max’s baptism helped ground Light of Hope, bringing them back to their vision to be outward-focused. The church’s neighborhood, in the southern part of Cobb County, is less affluent, more transitional, multicultural and racial ethnic.

“As the church’s treasurer, I still do a lot of the nuts and bolts,” says Alverson. “It brought me back to the reality of who we are, why we’re doing what we’re doing.”

“We are learning to not be afraid of change,” says St. Germain, “so that God’s purposes can be fulfilled.”