Home News Building on a legacy

Building on a legacy 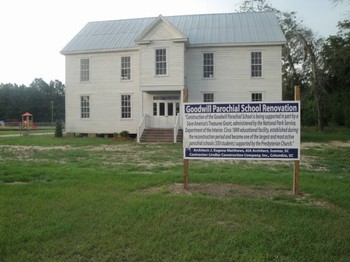 A once-derelict school building in rural South Carolina is ready to find new life in the Goodwill community. —Courtesy of Goodwill Parochial School

A once-derelict school building in rural South Carolina — built after the Civil War by northern Presbyterians wanting to educate former slaves ­— is ready to find new life in the Goodwill community.

Goodwill Parochial School was the subject of a Presbyterian News Service story in 2011, and at that time, work had been mostly completed on the outside and was underway on part of the first floor. Since then, the first floor has been mostly completed, with only a new floor in one room and the installation of heating and air conditioning still needed.

Most of the project’s funding has come from donations from the community throughout the year and at the annual fundraising gala put on by the Goodwill Educational and Historical Society (GEHS), a non-profit whose mission is the restoration of the “old school house” for historical, cultural and educational purposes “so that the rich history of Presbyterianism among African Americans is not lost and so that we are reminded of the rich mission and ministry of the PCUSA,” said the Rev. Johnnie Monroe, GEHS chairman.

The Farmers Telephone Cooperative in the area recently made a documentary about the Goodwill school as part of a series on landmarks of the Carolinas. The film provides an excellent opportunity to see the work that has been done to the building and also puts a human face on the project.

“They did a series of interviews with the African American community that attended Goodwill community and the interviews are wonderful,” said Bill Remmes, GEHS vice chairman. “It just gives such a nice feel for the history of the Goodwill school. People are obviously talking from their hearts about just day-to-day experiences of being a student at Goodwill school.”

The FTC has given Remmes and his group permission to distribute copies of the DVD in exchange for contributions, opening up another avenue to help raise funds. Remmes also appreciates the film as a piece of historical documentation and would love to see the Presbytery of New Harmony or the Presbyterian Church (U.S.A.) archive it.

Monroe, who is also an alumnus of the Goodwill Parochial School, would like to see the PC(USA) get behind the project with support because it speaks to the legacy of the denomination and serves as a reminder of what has always been a cornerstone of the church.

“The story of Goodwill is a story that needs to be told far and wide because it is a story of how our denomination was concerned about justice even back in the 1800s,” Monroe said.

Once completed, the building is expected to serve as a heritage and arts center where the community can experience some of the area’s African American history. It might also host community meals, entertainment or discussion groups.

Remmes noted the emphasis on the word “community” in all the plans.

“I say Goodwill community as opposed to Sumter or Mayesville because we are about 10 miles from Mayesville, 12 miles from Sumter and it is an identifiable community in and of itself,” he said. “I think it’s important to use the Goodwill facility as a center for a lot of that.”

Anyone interested in contributing to the Goodwill Parochial School renovation or looking for more information on the GEHS can contact the group at: