Children killed in attack near Damascus church and school 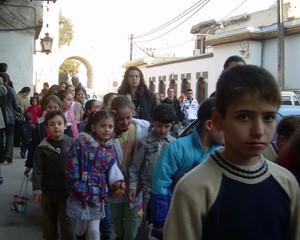 According to first-hand reports Monday afternoon from Jinishian Memorial Program (JMP) staff in Syria, mortar shells targeted at St. Sarkis Armenian Orthodox Church and school in Damascus caused the death of six elementary students on November 11. The property is shared by JMP, where two staff members witnessed the tragedy and offered help to the children and their families.

Jinishian offices in Aleppo also endured violence Monday. “The situation was very bad,” reports country director Talin Topalakian. “Several mortar shells and bomb blasts caused damage in many houses in Azizieh, which is a Christian area with many schools and churches.” The area had also been without electricity and water for several days.

Still, partners in Syria hold on to hope. Talin adds: “We're praying and sure that God will give us enough patience and courage to [bear] all these things.”

"This is a day of mourning," says Jinishian executive director Eliza Minasyan, "but also of resolve to continue bringing aid and hope amidst these communities ravaged by violence."

Compelled by the unrelenting crisis in Syria, in April the Jinishian Memorial Program released substantial additional reserve funds to Armenian communities in the war zone as well as refugees in Lebanon. Initial moneys exceeding $150,000 were immediately available for hands-on support in Aleppo and Beirut. Support is needed now more than ever. Donations may be made at pcusa.org/give/E051792. Contact Jinishian at jmp@pcusa.org, or call (800) 728-7228 ext.5291.

The Jinishian Memorial Program has served for decades and enjoys a strong reputation within these communities. It functions holistically as a development organization that is nimble enough to bring immediate emergency relief to those in greatest need.

Jinishian’s service to displaced Armenians throughout the Middle East is distinctive in its ecumenical work with all Armenian Christians, be they Apostolic, Catholic, or Evangelical. The program was founded by the bequest of Vartan Jinishian, an Armenian-American who gave the entirety of his fortune to enable Armenians in need to move from poverty and despair to self-sufficiency and hope — through relief, development, and spiritual uplift.