YAVs in South Korea stretched as they serve others, discern future 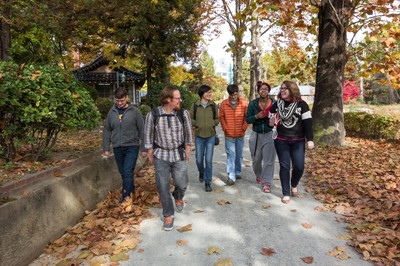 When Quantisha (Tisha) Mason told her mother she wanted to experience South Korea for a year as a Presbyterian Church (U.S.A.) Young Adult Volunteer (YAV) she responded, “I don’t support you in this.”

But worries over escalating tensions between South and North Korea and a desire to have her daughter near her as she explored post-college options were overcome by Tisha's resolve.

“When discernment came around, I just knew I had to come here to Korea,” Tisha says. She received her acceptance letter and decided to seek her mother’s support again following a return from a summer of camp counseling. “She came around when I told her, ‘I’m seriously going ― and you have five days with me,’” Tisha says.

Similar concerns were expressed by friends and family of the three other young adults spending the year in Daejeon, South Korea, as PC(USA) Young Adult Volunteers. But in each case they eventually found encouragement from their loved ones and affirmation of their call to Korea.

The Rev. Kurt Esslinger and his wife Hyeyoung Lee are the PC(USA) YAV site coordinators in Daejeon.  They provide support, facilitate local connections and, most importantly, help the YAVs explore their understanding of vocation over the year of service.

Esslinger comes at the work of a YAV site coordinator from his own experience as a YAV near Manchester, England in, 2002-2003, serving with an afterschool program in low-income neighborhoods.

“These experiences became the first time I realized there were other perspectives on life than just Texas,” Esslinger says of his YAV year and a year spent studying in Scotland. “All the things I was taught to value and prioritize in life are different for people in other cultures and other countries ... It’s imperative that we develop the skills to learn about and work with different cultures and people who have grown up to value something completely different that we were taught.”

Lee is a native of Korea and her father is a Presbyterian Church in Korea (PCK) pastor. She was born in the port town of Busan and after serving as a missionary intern in the Philippines during college decided to attend graduate school at McCormick Theological Seminary in Chicago, where she and Kurt met. Obtaining graduate degrees in Divinity and Social Work, Lee later taught social welfare policies and worked with immigrant women, mostly from Korea, as they sought social services.

At the same time Esslinger was working as a youth minister at Agape House Campus Ministry at the University of Illinois-Chicago. He had studied in Korea for a year shortly after he and Lee had met, but the couple didn't have plans to relocate to Korea. When the YAV site coordinator position became available they were urged to apply. Satisfied in their careers, the couple was initially reluctant, but with input from close friends and mentors the idea grew on them until they decided to apply.

Daejeon is one of four international YAV sites that join 13 sites in United States to host 73 YAVs in the 2013-2014 placement year. The program started in 1993 and has given more than 1,100 PC(USA)-affiliated young adults volunteer opportunities for a year of service and exploration. 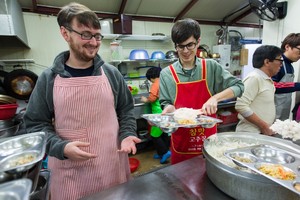 Joining Tisha in Daejeon are Benette Alldredge, Molly DeWitt and Eric Gleason. The Esslinger-Lee family and the YAVs are housed on the campus of Hannam University.

Started in 1956, the first president of the university, then called Daejeon Christian Academy, was a Presbyterian missionary named William A. Linton. The section of campus that houses the YAV program was once a thriving missionary complex with nearly 1,000 residents from a variety of denominations.

As the focus of missionary activity changed in Korea, the number of missionaries decreased, eventually to zero. At the invitation of the chaplain's office at the University, the YAV program has found a welcome home in recently constructed homes on the site of the former mission complex.

The YAVs and their site hosts course through their days at a steady clip. The YAVs attend Korean language classes at the University weekday mornings from 9:00 a.m. to 1:00 p.m.

Following lunch the YAVs make their way to their volunteer placements or other service sites for the afternoon, and often through dinner. Evenings are spent in language practice, discussion groups, keeping in touch with loved ones in the US, and in times of fellowship with one another, their service “buddies,” and their site hosts.

Gleason volunteers at a youth center, providing arts education. Because of previous music conducting experience he has been recruited to conduct the youth orchestra at his center.  Mason works at the same center and says she is learning to put her faith into action.

“Never be afraid to go to step out of your comfort zone,” Mason says of one lesson she will bring back with her. “Take your worldview to its farthest limits and then take a step beyond that.”

DeWitt, from a small town in Indiana, volunteers at a center where creative programs also thrive among children with difficult home situations. “You don’t have to go half way around the world to be able to live out your faith every day and do something, and help others,” she says. “I could have done that in my home town, but I needed a drastic change in my life.”

Alldredge serves among the homeless in the area and plays music regularly. “I’m learning about different ways people worship, and I’d like to take that back with me," he says. "Getting a broader picture of worshiping styles can be helpful, it opens up new understanding for them and could deepen their faith.”

International YAVs raise the $4,000 needed to support their stay abroad through donations made by congregations, family and friends. Those serving in the United States raise $3,000. Each maintains a blog as a way of communicating their experience to donors and as a journal of their time spent in Korea.

Remembrances of the missionary foundation of the school remain in Daejeon. The University maintains the original homes of two of the early missionaries, including Linton’s. With a mix of Korean and Western architecture, these homes have been restored and preserved and now serve as a museum and archive of the mission activity that brought the University into existence.

The chaplain's office at Hannam University is pleased not only to have the YAV program on site as a way to honor their missionary beginnings, but also as a means of partnering Korean students with their American peers for service and learning together. 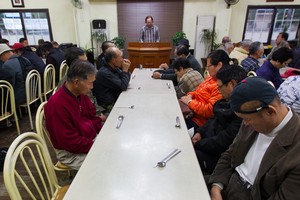 The Rev. Kurt Esslinger offers a blessing at the soup kitchen that provides service opportunities to PC(USA) YAVs and their “buddies." —Gregg Brekke/SixView Studios

Through the “buddy program” a Korean student is assigned the same volunteer context as one of the YAVs, accompanying them and assisting with language and cultural understanding.

In return, Korean students are able to enhance their English language capabilities and fulfill the service hours required by each student at the university. The chaplains office and the PC(USA) have high hopes that upon graduation some of these “buddies” will apply for, and be accepted to, the PC(USA) YAV program and be able to complete their year of service in the United States.

"It would be a full-circle in the partnership between the university and the Presbyterian church in the United States," says Hannam University chaplain the Rev. Yong Han Chung. "It creates a wonderful opportunity for our students to experience service in a new context."

The Rev. Hunter Farrell, PC(USA) Director for World Mission, expresses pride in the YAV program, saying it is “one of the most effective programs the church has going to invite a whole new generation into the mission of the church.” Farrell’s son, Will, just completed a YAV year in Kenya.

“The natural tendency for all human institutions is to look inward,” says Farrell. “The challenge for the church is to look outward as Jesus did. The YAV program opens the windows and lets the church experience the world through these young people.”

Noting that one-third of all YAV alumni are now ordained ministers in the PC(USA), he sees that the other two-third are the backbone of their faith communities.

“These alumni are working in service, supporting their local communities, helping race relations, advocating against bullying, running food pantries, and the list goes on,” he says. “[The YAV program] connects the church and the world in ways that many congregations aren’t’ able to. It invites participants into a life of engaging the world with the church.”

These statistics are borne out by this current group of YAVs in Korea, where three of the four are fairly certain they will pursue ordained ministry upon their return the United States. Only Alldredge is on the fence about ordination, but doesn’t count it out, saying he is using this year as a time of discernment.

Farrell says the program faces the “exciting challenge” of trying to triple the number of YAVs over the next four years. There are financial barriers to this expansion, he notes, but an even greater need is to get the YAV word out to congregations, colleges and affiliated institutions.

“We are looking forward to seeing what this year brings,” says Esslinger of the worldview expanding experiences the YAVs are having. “Its training and life skills they couldn’t get anywhere else, and we know they will come away with strong leadership skills for their careers and churches.”

Gregg Brekke is a free-lance writer and photographer in Portland, Ore. He is also president of the Associated Church Press and a minister in the United Church of Christ.