South African leader remembered by Presbyterians as ‘icon of reconciliation’ 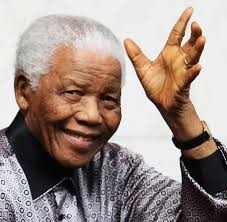 Nelson Rolihlahla Mandela ― a modern-day Moses who led his people, his nation and the world out of the racist captivity of apartheid in South Africa ― is being remembered by Presbyterians as a charismatic leader who literally gave his life for justice and equality.

Mandela, who died of respiratory failure today (Dec. 5) at the age of 95, served from 1994-1999 as the first president of multi-racial, post-apartheid South Africa, but only after serving 27 years in prison for his anti-apartheid activities. Released in 1990, he served as president of the African National Congress from 1991-1997 and was the first black South African elected president of his nation.

His government focused on dismantling the legacy of apartheid through tackling institutionalized racism, poverty and inequality, and fostering racial reconciliation. Under his leadership ― and that of his friend, Anglican Archbishop Desmond Tutu ― South Africa’s “Truth and Reconciliation Commission” became an emulated model for racial, political and social recovery around the world.

“What Nelson Mandela embodied was all our hopes and dreams for a world not divided by race,” said former Presbyterian Church (U.S.A.) General Assembly Stated Clerk Clifton Kirkpatrick, who met Mandela at the 8th Assembly of the World Council of Churches in Harare, Zimbabwe in 1998. “And to realize those dreams without violence.”

Those who heard Mandela’s address to that Assembly won’t forget the tribute he paid to the mission schools ― many of them Presbyterian ― that educated black South African children during centuries of forced racial separation. Mandela, himself educated in a church mission school, praised them for their “clear commitment to justice and hope rooted in Gospel values,” as this reporter recalls. “Without those religious schools, I would not be standing before you today,” he told the Assembly.

“The roots of his willingness to forgive and reconcile are rooted in his religious upbringing,” said the Rev. Vernon Broyles, a longtime social justice staffer for the PC(USA) who has visited South Africa numerous times. “I don’t know if Nelson was a believer or not,” Broyles added, “but his mother was a deeply committed Christian and those values were deep within him and without them what happened never would have happened.”

“Gandhi, Martin Luther King, Mandela ― they of course represent a broader movement,” Kirkpatrick noted, “but they are among those who came along at the right time, when it seemed transition could only be achieved by violence, and insisted there was a better way.”

“I think for many people who heard him speak, Mandela’s appearance will probably be remembered as the emotional high point of the WCC Assembly in Harare,” said Eva Stimson, former editor of Presbyterians Today, who served in Harare as editor of the WCC’s official report. “His visit was unexpected and when it was announced there was wild applause,” she recalled.

Mandela’s iconic stature transcended borders, said the Rev. Jerry Pillay, general secretary of the Uniting Presbyterian Church of South Africa and president of the World Communion of Reformed Churches (WCRC). “We acknowledge that he is not only a hero and legend in South Africa but an icon claimed and honored by the world at large,” he told Presbyterian News Service.

“We most sincerely appreciate the role he played in dismantling apartheid and in bringing South Africa into a new multi-racial democracy. He is a man of incredible stature who epitomizes the essence of true forgiveness, reconciliation and peace,” Pillay said.

“His ability to transcend his own personal hurts and pain in spending 27 years of his life in prison so sacrificially, and yet on his release being able to bring both black and white people together to build a new South Africa, speaks volumes about the fact that he placed the interest of South Africa far above his own needs and personal aspirations,” Pillay added.

“He was such a hero,” the Rev. Eileen Lindner, pastor of the Presbyterian Church in Tenafly, N.J., and former deputy general secretary of the National Council of Churches told Presbyterian News Service. “Here’s a man who walked out of prison and into the presidency and invited his tormentors to join him.”

Broyles agreed. “I really thought that the end of apartheid would not come without significant bloodshed,” he said. “When Nelson walked out of prison into a peaceful transition, I firmly believe it was a divine miracle.”

Linder recalled Mandela’s first visit to the U.S. as president of South Africa. The evening before speaking to the United Nations, he was a guest of the NCC at a reception and worship service at fabled Riverside Church in New York. “It was a wonderful time,” Lindner said, “Mandiba (his tribal name) was not a believer but he knew that it was the efforts of the churches that helped break the back of apartheid and he wanted to say thanks.

“There’s something special about the dreamers of big dreams,” Lindner said, “and that South Africa and the world have had both Mandela and Desmond Tutu during the same set of years is truly a moment of grace.”

Setri Nyomi, a Ghanaian Presbyterian who is general secretary of the World Communion of Reformed Churches (WCRC), praised Mandela as “an icon of reconciliation.”

“We give thanks to God for his prophetic leadership and example as a courageous leader who exposed and defied the very vicious evil of apartheid and paid a heavy price for it,” Nyomi told Presbyterian News Service. “Yet, at the threshold of victory over apartheid, he was gracious and proved to be the icon of reconciliation and moving all of South Africa into a new era characterized by freedom and justice, an era in which South Africa’s multi-racial and multi-ethnic population can begin to build community together harmoniously.”

Mandela also inspired the WCRC’s predecessor World Alliance of Reformed Churches to prophetic action, Nyomi added. “Nelson Mandela was the inspiring hands-on leader whose vision, life and example fostered the reconciling community that the world needs,” he explained. “Our actions of ‘status confessionis’ (an essential article of faith) on apartheid in 1982 were inspired by what leaders like Mandela stood for and for which they suffered. He continued to inspire us throughout his lifetime.”

That inspiration must carry on into the unfinished future, Pillay said. “Our prayer is that our political leaders in South Africa, his family and all people in South Africa and beyond this country will strive to honor, respect, exemplify and build on the legacy, values and things he has taught and imparted to us. As Mandela leaves us from this planet called earth may the things he struggled and fought for live with us forever.”

The Rev. Neal Presa, moderator of the PC(USA)’s 220th General Assembly (2012), the Rev. Gradye Parsons, stated clerk of the General Assembly, and Linda Valentine, executive director of the Presbyterian Mission Agency, issued a call to prayer “for a world in mourning at the death of Nelson Mandela, the first black president of a free South Africa, international peacemaker, human rights activist, and Nobel Peace Prize winner.”

The full text of their call:

And I heard a voice from heaven saying, ‘Write this: Blessed are the dead who from now on die in the Lord.’ ‘Yes,’ says the Spirit, ‘they will rest from their labors, for their deeds follow them.’ (Revelation 14:13, NRSV)

Everliving God, whose countenance greets us at the birth of life, whose love accompanies us in our laboring days, and whose gracious welcome grants us the final rest at the twilight of our years, we look to you in this hour, as did your servant and our brother, Nelson Mandela.  Into your eternal comfort, gracious Lord, we commit his soul, where in your everlasting abode, in your very heart, he finds his peaceful rest.

With grateful hearts, we offer our thanks to you, Lord, for the life and witness of Nelson Mandela among us, who, like the prophets of old, showed us and the world the way of truth and life in his unwavering commitment to equality for all and to healing and reconciliation in a divided and broken world, at great cost to himself and his family.

We give you thanks, faithful God, for you accompanied Nelson in his years of imprisonment, strengthening his resolve, kindling and keeping the flame of hope in him alive that one day his beloved South Africa would see neighbor loving neighbor, not as a divided and defeated people partitioned by skin color, ideology or region, but finding common cause in their humanity as people created in your image, and therefore precious in your sight.

Loving God, who as Jesus Christ in the power of the Holy Spirit, you showed us the ways of your kingdom and what servant leadership is about, we remember your son, Nelson, as one whom you anointed to serve as a leader of South Africa and the world for a generation, whose words of wisdom, acts of courage, and humble spirit testified to the power and possibilities of your grace that knows no bounds. Through one man, you have touched the lives of so many.

In life and in death, in body and in soul, we belong to you, loving Lord. So, in this hour, unite us in prayer as we grieve with the Mandela family. Accompany them with your generous and embracing love in their hour of mourning. Turn their weeping to singing, their downcast heads to dancing, and keep alive in their hearts and in ours your vision of a better and just world, even that same dream that you placed upon Nelson’s soul, and for whose labors we trust you will offer the word, “Well done, good and faithful servant.”

In the name of your servant Son, Jesus Christ our Lord and Savior. Amen.