Arch B. Taylor, Jr. and Joan Wyrick Ellison want their giving to inspire others to support World Mission 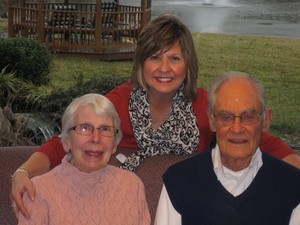 Arch B. Taylor, Jr. and Joan Wyrick Ellison have agreed to match all gifts to support Presbyterian mission personnel through April 15, up to $50.000. They are shown with Pam Jensen, regional funds development manager with Presbyterian World Mission.

Arch B. Taylor, Jr. and Joan Wyrick Ellison share a strong love of the Presbyterian Church (U.S.A.) and its mission outreach. They hope that others will join them in support of their denomination’s international mission efforts.

That’s why these lifelong Presbyterians and longtime friends agreed to match all contributions given to support Presbyterian mission personnel through April 15, up to $50,000.

Arch’s experience with Presbyterian World Mission is very close and personal. He and his first wife, Margaret, served more than 35 years as Presbyterian missionaries. Most of their time was spent in Japan at Shikoku Christian College. Arch taught Bible, and Margaret, who died in 1984 after 40 years of marriage to Arch, taught social welfare courses in the same school.

“When I taught the Bible, I started with ‘In the beginning God created the heavens and the earth,’” Arch says, quoting Genesis 1:1. “God is the God of all people.”

In Japan, he and Margaret embraced the priorities to “preach, teach, and heal,” three words that characterized the ministry of Jesus. The year that Margaret wrote the Annual Report on Presbyterian work in Japan, she used those words to highlight the holistic nature of mission efforts in the country. Arch and Margaret appreciated seeing Presbyterians strengthen their policy of working in partnership with local Christians and stepping up their ecumenical commitments. Today Arch cheers the recent efforts of Presbyterians to build positive relationships with people of other faiths. “As I read the Mission Yearbook, I see that interfaith work is happening in several places,” Arch says.

As Arch talked about his passion for and financial commitment to Presbyterian World Mission, it sparked Joan’s interest in making a contribution. “It was such a feeling of peace that it was the right thing to do,” Joan says. “I give the Lord the credit.” As she considered making this gift, she sensed “a wonderful feeling of calm and love” and she knew that making the gift was “providential”. The decision was an important one.

Joan says she learned much about generosity from her late husband, A. D. Ellison, a Presbyterian pastor for 65 years in Indiana, Kentucky, West Virginia and North Carolina. “He loved to help people and it rubbed off on me,” Joan observes.

Arch and A. D. were classmates at Louisville Presbyterian Seminary. One served overseas and the other at home, but they appreciated each other’s ministry, and after retirement they were occasionally able to get together.

Joan says her giving to World Mission helps fulfill her late husband’s stewardship commitment. As she heard Arch speak about Presbyterian World Mission’s giving opportunities, the thought of contributing to a matching gift challenge developed into an exciting act of generosity. “I felt that perhaps it would inspire other people to give just like Arch inspired me to give,” she explains. “We both thought it was a wonderful way to invite others to join us in making a difference in the world through the work of our mission co-workers.”