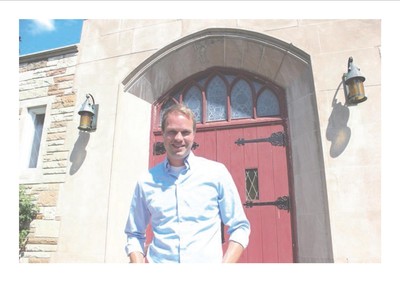 Dan Vigilante is on a mission to create a vibrant new ministry geared toward young people in Uptown (Minneapolis).

Once officially ordained, he will be one of the first openly gay pastors to lead a Presbyterian church. The denomination changed its rules to allow gay people to be ordained about a year ago.

Westminster has partnered with Grace-Trinity to reenergize it and expand its presence in the community. The downtown church has nearly 3,000 members while Grace-Trinity has around 70 with a sanctuary that could fit 350 people. It also has a thriving nursery school.

The Grace and Trinity congregations merged about 25 years ago. They have been part of the Uptown area for about 100 years.

The church was on the verge of closing before Westminster stepped in to offer its support, said the Rev. Tim Hart-Andersen, pastor at Westminster.

“Knowing the demographics of the community, Westminster and Grace-Trinity conducted a search for a new young minister to take this church into a new era,” Hart-Andersen said. “It will be an active presence in Uptown for generations to come.”

He said Vigilante is the “perfect leader” to rebuild Grace-Trinity.

“He’s armed and ready,” Hart-Andersen said, making a reference to his unique last name. “He’s charismatic in the best sense of the word.”

Before moving to Minneapolis, Vigilante, 35, worked at a Presbyterian church in Newport Beach, Calif., for eight years. He’s a graduate of Princeton Theological Seminary.

The deacons at his old church made a box filled with items to prepare him for life in Minnesota.

The survival kit includes a hat, ice scraper, foot warmers and bug spray, among other things.

“I wasn’t looking for this position,” Vigilante said of his new job. “I never imagined I’d be in a church like this. The church I came from is in some ways the complete opposite. It was thriving, growing ― plenty of money to do things … and yet there was something very compelling about taking a step back and imagining myself in a new role as minister.”

Despite not having the formal title, Vigilante had a very active leadership role at the church in southern California. He preached, went on mission trips, made hospital calls, prayed with people as they were dying and arranged memorial services, among other things, Hart-Andersen wrote in a church bulletin.

“In short, he has served ably in every way that he could as a minister, without having ‘the Rev.’ in from of his name,” Hart-Andersen wrote.

Vigilante said he knew he wanted to be a leader in the church at a young age. He grew up in northern New Jersey.

“I felt called to ministry from a young age ― like seventh grade I could probably have told you I’d be a minister when I grow up,” he said.

At the same time, he was discovering his sexuality.

“I never struggled to reconcile these two really important parts about me ― being Christian and experiencing a calling to ministry, and coming to terms with my sexuality,” he said. “I never felt the anguish or conflict some people do.”

Vigilante is working on both small and large projects to get the church ready for a larger congregation.

Once improvements to the sanctuary were completed ― it was rededicated at an open house on Feb. 24, he has kicked off an effort to recruit new members. Of the roughly 70 members on Grace-Trinity’s rolls about 35 regularly attend Sunday worship.

He’s working to make the 10:00 a.m. service more inviting to young families with children and also plans to launch a Sunday evening service geared to young people who live in Uptown, designed to be fun and lively.

While many churches have trouble attracting young people, Vigilante is up to the challenge. He’s excited for new members to be part of defining a sense of community at Grace-Trinity. “It’s just fun to start something new,” he said. “What a gift.”

Sara McKenzie is the editor of the “Southwest Journal” in Minneapolis.