Home News No longer ‘white-knuckling it’

No longer ‘white-knuckling it’ 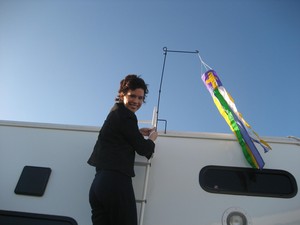 New worshiping community leader Tamara John knows what it’s like to lose everything. “I’ve been brought back from nothing,” she says, “to the other side of learning trust in Jesus.” The story of how she ended up starting a new worshiping community in an RV park in Huntington Beach, California is ultimately about the redeeming and healing power of Jesus Christ. “Without Jesus, I’d be white-knuckling it,” she says. “Trying to walk away from power that’s destructive to me.”

Fifteen years ago, John was into fashion, clothes, jewelry. For hours she’d sit in front of her custom-made vanity with makeup, playing with her long wavy hair. “The more [money] my husband and I made, the darker it got,” she says. “We’d party—drugs and alcohol—then recuperate and do it all over again.”

John was living in a big city attending a Bible study at a nearby nondenominational church. One day, a woman pulled her aside, telling her, “I love you, but you are going down a bad road.” Shaken, John began to pray. Over time she felt God saying, ‘I have a life for you; this is not the life I have created for you.’ John began to step out of the party scene, hoping her husband would follow her example. Instead he gave her an ultimatum—become the woman he married or leave.

John went through emotional, physical, spiritual, and financial trauma. Divorced and starting over, she ended up living in a guest room in the home of a friend in Marina del Rey, California. She got involved in a Stephen Ministries program at nearby Bel Air Presbyterian Church, where she felt a call to minister and care for people who had been wounded by life. To her great surprise, this desire deepened at Fuller Theological Seminary in Pasadena. Nearing graduation, she got a feeling that she would have a base to do this kind of ministry, but it would be mobile.

John was unsure what her feeling meant. “I was a bit unsettled about being mobile,” she says. “But one night as I was praying it became very clear to me. I saw this white RV with a chapel in the back. “  Knowing she would need help and additional training, to start a new ministry she received church plant training at the Presbyterian Centers for New Church Innovation (West Coast). “It was very helpful in acting out what God had already impressed on my heart.” 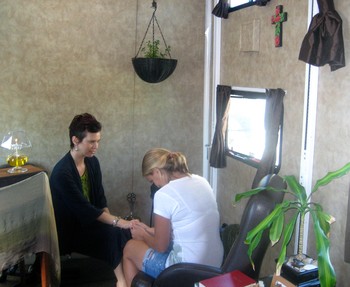 Tamara John ministers to RV park residents in a 10 by 12 foot chapel in the back of her RV. —Photo courtesy Tamara John

John began looking for the perfect place to do RV park ministry. One night near dusk, she pulled into a park she’d driven by earlier. Noticing the young woman in the office was wearing a cross, she blurted out, “You’re a Christian; you’ve got to pray with me!” The woman ran to get her husband. “You’re not going to believe this,” he said, “but we’ve been praying for months for some kind of ministry here.”

Two years ago, John began her RV ministry in the park. It is full of people who have lost their homes because of foreclosure, who are going through a divorce, who are sick and need to be close to a nearby hospital. Living in her Fifth Wheel custom-made RV with a 10- by 12-foot chapel in the back, she minsters to those God placed on her heart.

“I’ve talked with people who have walked away from God, who are struggling to trust God again,” she says. “I’m dealing with kids’ bullying issues, shame, guilt, and despair. People feeling lost, trying to restore their broken relationships.”

It took John nearly a year to earn the trust of her new community, which includes 52 RVs in the park full time, each housing one to six people. There are five children under the age of 7, four 10-year-old boys, six teenagers, and four young men who live together, on their own. “I’m learning about surrender to Jesus, total dependence on God,” says John. “There’s a huge difference between who I was and who I am now. ”

John’s RV Park ministry—which operates under the umbrella of the nonprofit Life Is Full of Choices—recently received a $7,500 new worshiping community seed grant from Presbyterian Mission Agency. “It means everything to me,” John says. “I live very lean, off people’s donations. I even cut my own hair. Unexpected gifts help get me through the tough times.”

John is on track to be ordained as an evangelist to the RV Park ministry by the Presbytery of Los Ranchos in May.  Other ministry partners include two Christ Presbyterian Churches, one in Huntington Beach and the other in Hollywood. “I get to baptize people now, to bring them down into the water and raise them up into new life in Jesus Christ. That is my hope for everyone I meet—for Jesus to make them new, with all the old gone.”