Home News Blessed to be a blessing

Blessed to be a blessing 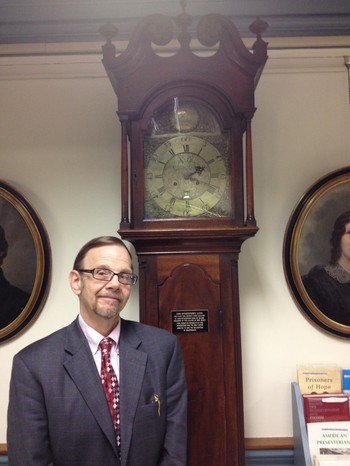 Fred Heuser is retiring from the Presbyterian Historical Society after 31 years of service.

To listen to Fred Heuser talk about his life and career is to repeatedly hear the word “blessed.”

On May 15, Heuser retires after 31 years with the Presbyterian Historical Society (PHS) here, the last 21 years as the venerable institution’s director. “To have followed my passion for history from early in life and to have wound up here,” Heuser says of PHS, “I have been profoundly blessed.

Fred Heuser “knew fairly early” that he loved history and wanted “to do something with it.” He majored in history at Ryder College ― graduating in 1970 ― and began his career by teaching it at the high school level, “but knew I didn’t want to do that all my life.”

He returned to school, earning master’s degrees in history at Villanova University and in library science at Drexel University, along the way developing a keen interest in archival work. After an internship as an archivist at the Smithsonian Institution in Washington, D.C., Heuser went to work for the State of New Jersey historical archive, “but I was not thrilled with government work.”

His wife, Lorrie, saw an ad for an archivist position at PHS and the rest, as they say, is history. “They told me I was the ‘future,’” Heuser says with a laugh. “I was just looking for a job. I’m here because God has a great sense of humor.”

He later earned his Ph.D. at Temple University. His dissertation was on Presbyterian women missionaries. During his studies, he says, “I dreamt about them but told my wife, ‘Don’t worry ― they’re all dead.’”

Heuser joined the staff of PHS in 1982 ―its first professional archivist since its founding in 1852. His responsibilities increased through the years following Presbyterian reunion in 1983 and in 1990 he was named director of PHS, succeeding William B. Miller. “I debated taking the job,” Hueser recalls, “because it involves budgets and travel and planning and church politics rather than records and research.”

But at the end of the day, Heuser recalls, “I felt completely dedicated to the historical society and felt a clear sense that God was calling me to do this.”

The PHS Heuser joined in 1982 “was very different than today,” he says. “The staff was older and their training was very different. The most advanced piece of equipment we had was electronic typewriters. Today our staff is younger, better trained and we are totally dependent on technology.”

But one thing has not changed, Heuser says. “We understood then and we understand now that PHS is here to serve the church,” he says. “Everything else is secondary. It’s not even ‘customer’ service ― its service to the church.”

Through all of its services, PHS tries “to identify critical issues facing the Presbyterian Church (U.S.A.) and bring historical perspective to them,” Heuser says, “to get people thinking about their Presbyterian history and how important it is to their understanding of what’s going on right now.”

Heuser insists that PHS is even more important to the PC(USA) today “because we’re in uncharted territory. We’ve been through uncertain times before and Presbyterians need to see what those challenges were and how the church dealt with them.”

He likes to say that “history doesn’t repeat itself, but it rhymes.” Familiarity with Presbyterian history “helps us identify our challenges and what we’ve learned before and what lessons can be drawn ― our story is not finished and will play going forward.”

One element of that future ― for the PC(USA) and PHS ― is financial. “We have experienced a 30 percent cut in our budget in recent years,” Heuser says. “And so a year ago we developed a new business model that is more entrepreneurial and engages new markets. We have to raise more revenue and be more energetic and creative in what we offer. It’s all part of how the whole church is changing.”

Heuser says his biggest regret was the decision in 2006 to close the PHS facility at Montreat Conference Center in North Carolina. “It was a necessary decision because that’s where the church’s finances were at the time,” he says. “Still, it was the most difficult time of my tenure and I had lots of sleepless nights.”

Heuser says he’s “happy to see the Presbyterian Heritage Center at Montreat because it meets a need.” The heritage center is an independent facility with a number of exhibits depicting Presbyterian history, primarily in the South.

Heuser says he’s “given a lot of thought” to life after May 15. Most clear, he says, “is what I don’t want to do. His top three post-retirement priorities are his grandchildren, the writing of his family history ―“It’s never been done and I’m very curious about it,” he says ― and playing music.

“I’ve come to realize I’m a recovering musician,” he says, looking forward to more time practicing his guitar and playing in a jazz trio.

And then there’s the church. Heuser, raised Catholic, became Presbyterian in 1968. Lorrie was “a military Methodist” and after marrying they searched for a church home that would meet both their needs. They settled at Collingswood (N.J.) Presbyterian Church and after more than 40 years are still there. “It’s really my second Presbyterian job,” Heuser says with a wide grin.

On May 15, Fred Heuser walks out of the PHS building in Philadelphia for the last time as its director. When he awakes on May 16, he says, “I’m going to thank God for a new day, for all my days. I’ll drink my coffee more slowly, read the newspapers more thoroughly and start practicing my guitar a little earlier.”

And, he says, “I’ll wonder about the people at the Presbyterian Historical Society and how they’re doing.”

To celebrate the retirement of Fred Heuser, PHS has established the Heuser Fund. Gifts will support programs and services at PHS designed to serve congregations, Presbyterians, scholars, researchers, and many others, and will allow PHS to care for hundreds of thousands of books, manuscripts, and official records from churches across the United States. To contribute to the Heuser Fund, go to: http://www.history.pcusa.org/support/heuserfund.cfm.