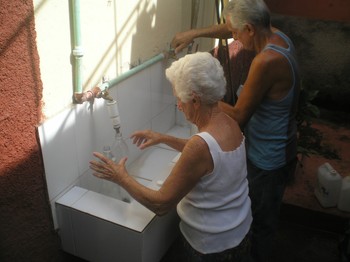 Three days a week they come to Prince of Peace Presbyterian Church carrying empty plastic bottles of all sizes and shapes, many labeled “Living Waters for the World.”

Until 18 months ago there was no pure water in this barrio ― named La Playa because of its proximity to the rocky beach nearby. Residents of the community could only count on any water at all “maybe one day in every ten,” says Prince of Peace’s pastor, the Rev. Leticia Ramos, 41.

In November 2011 Living Waters for the World ― a ministry of the Synod of Living Waters ― installed one of its water purification systems at Prince of Peace Church, and life for the people of this community changed dramatically.

“As soon as the system was installed,” Ramos says, “the people in the community said, ‘Hey, the church has living water!’ and started coming.” 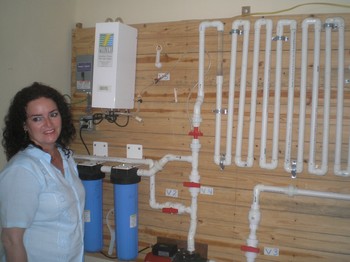 The Rev. Leticia Ramos, pastor of Prince of Peace Presbyterian Church, with the water system installed by Living Waters for the World. —Jerry L. Van Marter

On this day, four volunteers from the 50-member church fill bottle after bottle, jug after jug from two taps, while dozens of community residents stand patiently in line waiting their turn. Today they will distribute more than 2,500 liters of purified water in just over an hour.

“We never run out of water,” says one volunteer, an elderly woman named Juanita, “just like Jesus.”

Many people who come to the church for water ask about the church’s other community programs, says Ramos, an energetic redhead who has been Prince of Peace’s pastor for six years. A native of Sancti Spiritus, a city east of Matanzas, she graduated from the Evangelical Seminary of Theology here in 2002 and served a rural church in the area before coming to Prince of Peace.

“They are from all different religious traditions, but are hungry for spiritual training,” she adds.

When Ramos talks about her neighbors, she could just as easily be talking about her own background.

“I was not raised in a Christian family,” she says. “When I was a high school student, a classmate invited me to her church. I had never been in a church before. I felt spiritually at home and said to myself, ‘I want to stay here.’” 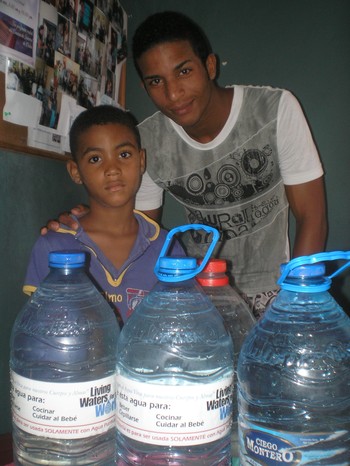 This occurred at a time in the mid- to late-1980s before the Cuban government relaxed its restrictions on religious activities in 1991. “There were not many people in the church then and no young people,” Ramos recalls. The “youth group” consisted of the pastor’s daughter (Oneida, daughter of the Rev. Hector Mendez, who is now pastor of Havana’s First Presbyterian Church) and Ramos.

Prior to 1991, Cuban law also banned open Christians from working in professional capacities, such as medicine, law and teaching. But Mendez nurtured and mentored Ramos’ faith and sense of vocation.

Her days are full. “Here we have a children’s program, a women’s program (the organizer of the water distribution ministry is president of the congregation’s women’s association), a youth program and an adult Bible study,”

The Bible study attracts 12-15 participants each week. “They are interested in the Book of  Revelation, the parables, women in the Bible and right now in families,” Ramos says, because June is the “Month of the Family,” with observations of Mothers Day in May, followed by Fathers Day and Children’s Day in June.

The “living water” ministry has also generated a fresh corps of volunteers for Prince of Peace Church’s other ministries. “Many people come and say, ‘Pastor, do you need any help? I’ll do anything,’” Ramos says. “The church is little, but the community is like family.”

Ramos, bubbly and outgoing, has started another simple ministry that has proven popular in the neighborhood. “Every day I make coffee for the people,” she says, noting that coffee is a real luxury for most, “and they talk with me and each other about the community’s problems.

“I need my neighbors,” Ramos says, “and God continues with us.”