Home News When ‘Christian’ and ‘citizen’ go hand in hand

When ‘Christian’ and ‘citizen’ go hand in hand 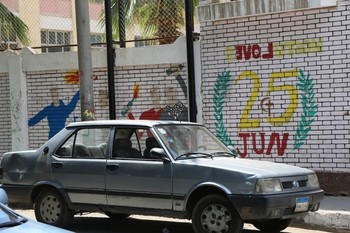 Even the graffiti has changed in Egypt since the Jan. 25, 2011, revolution, allowing an openness forbidden during the long years of the Mubarak dictatorship. —Erin Dunigan

Editor’s note: On a recent solidarity visit to the Synod of the Nile, the PCUSA’s partner church in Egypt, a delegation including Moderator Neal Presa had the opportunity to meet with Egyptian Christians and hear their stories. This is one story in an ongoing series.

Christians in Egypt have long been a minority — and Presbyterian Christians are a minority of a minority — but this bit of leaven is beginning to have a great impact upon the whole.

Presbyterian presence in Egypt began more than 150 years ago, when Presbyterian missionaries established outposts along the Nile to provide medical and educational ministries to all people regardless of religion — a thread that the Evangelical Presbyterian Church in Egypt continues to weave into its mission and ministry even in the midst of challenging societal times.

“After the Jan. 25 revolution (2011), we started realizing that we needed to take part in society, to find a way to be helpful to the state,” said Hani Behman, an engineer, a Presbyterian and a member of what is being called the Citizenship Committee — a gathering of Christians across denominational lines to build a better future for Egypt.

Before the revolution, and because of its minority status, the church was often more like a shelter from the world rather than an outpost from which to be sent into the world.

“We always knew the outcome of the elections, so we never participated,” said Behman, sharing the sense of futility that had become commonplace among Egypt’s Christian population before the revolution.

But that sense has shifted dramatically in the past two and a half years, and the move from shelter to solidarity is having quite an impact.

“We want to be helpful to our society — in the same way that the previous missionaries were more than 100 years ago who came to found schools and hospitals and outward-looking activities,” continued Behman.

Vivien Zaki is another leader of the Citizenship Committee’s. She works with and among Christian congregations for the betterment of all Egypt.

“Christians are thought about as immoral people because of the image portrayed from Western movies,” she said. Often, Muslims in Egypt formed their perceptions of Christians from such media outlets rather than from personal encounters. “When we started to speak out — which wasn’t allowed before the revolution — these perspectives of Christians began to change.”

But Christians in Egypt are doing more than speaking — they are backing up their words with actions.

One such example, part of the ministry of the Citizenship Committee, is the mobile clinics that are set up during protests or other encounters that escalate into violence. These church-run clinics don’t wait for the injured to come to them. Instead, they go out into the violence to help the injured, regardless of politics or religion.

“We move to where the troubles are,” Behman said. “If there is something in Tahrir Square, we send our people to where the problem is. We don’t wait inside. We are active.”

Through such tangible acts of love, compassion and self-sacrifice, the church hopes its witness will be seen as evidence of their Christian faith and Egyptian citizenship.

At a special gathering of the Synod of the Nile in March, the role of the church in shaping the future of Egypt was a central topic.

Continuing in the tradition of those early missionaries a century and a half ago while emphasizing its Arab and Egyptian roots, the church expressed concern with the ‘highest interests of our nation’ and the desire to ‘reinforce every effort which aims to develop education and improve health services in upgrading the lives of its citizens.’ This concern is based on the understanding that in following Jesus, the ‘church seeks to make a positive contribution in the achievement of goodness and righteousness for all people.’

Such values of honesty, transparency and openness are in themselves a witness within a culture that is often more familiar with corruption and greed.

Behman told a story of one man affiliated with a radical Islamist group who was injured during a clash in a recent demonstration. He came into the mobile clinic unsure whether he would be treated and afraid of being shot because of his religious and political affiliation.

“I gave him something cold to drink and asked if he wanted something to eat as he was waiting,” Behman said. “I said to him, ‘We are the church and we are here to give you a hand. You are safe here with us.’ I think he began to reconsider his truth”

It is not easy work. It is not quick work. It can often be discouraging and challenging.

“We are not safe,” Zaki said. “We are not secure. But we are not afraid and we will not back down. If we do, what will happen to Egypt then?”