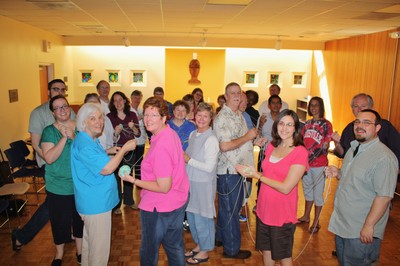 For Such a Time as This participants demonstrate their unity by linking themselves together with yarn. —Ken Meeks

Even though it was the book of Esther that inspired and named the Presbyterian Church (U.S.A.)’s small-church residency program, For Such a Time as This, the members of its class of 2011 now find themselves instead living in—and into—the miracle recorded in the book of Acts.

“Pentecost is a good way to think of where we are as a church,” said Esta Jarrett, pastor of Canton (NC) Presbyterian Church, during opening worship for the class’s closing gathering. “We spent a year and a half talking, dreaming, getting to know each other, and building trust, which all led up to the Day of Pentecost and the deep realization that the Holy Spirit is there in the congregation, moving and stirring things up. Everyone is still coasting on it, and our conversations have only gotten bigger and deeper in the past two weeks.

Jarrett is one of 10 recent seminary graduates who received their first calls to ministry in the second class of For Such a Time as This, a program designed to renew and grow small churches and help them to become healthy, missional congregations.

The program, an initiative of the Theology, Worship, and Education ministry area, pairs small, underserved congregations in rural, small town, and urban settings with recent seminary graduates in a two-year pastoral-residency relationship, during which they are supported and guided by a cluster of pastor-mentors. Since the program began in 2010 with its inaugural class of six pastoral residents, 22 recent seminary graduates have served 26 congregations in 10 presbyteries.

The For Such a Time as This closing gathering brought together the 10 members of the class of 2011—at least eight of whom will continue to serve in their original church placements—at the William Black Lodge in Montreat from May 29 to 30. The purpose of the event—in addition to sharing in-depth presentations on the health and growth of the pastors, their residency congregations, and the program’s partner presbyteries—was mainly to provide the first-call pastors with mutual support and closure at the end of the program’s two-year cycle.

“We have witnessed some remarkable growth and transformation in the first two classes that have now concluded their residencies,” said Cindy Cushman, the program’s coordinator. “Our pastoral resident in North Dakota reported 21 baptisms and 20 new members in her first two years. Other churches have grown by engaging their communities, reaching out to new neighbors and new immigrants, and starting much-needed ministries such as tutoring and food-distribution programs. Through For Such a Time as this, the pastors and their congregations now have renewed energy, spirit, and hope.”

They also have—in each other and within the program—an extended family.

“As I think about For Such a Time as This, one of the things that comes to my mind is the relationships we share as brothers and sisters,” said Jason Clapper, pastor of the Lavonia Presbyterian Church in Northeast Georgia Presbytery. “It’s really important for younger pastors to have this kind of positive talk and encouragement, so that we’re not only talking about the things that are broken down and not working in the denomination. What we need now is a vision of hope, which we’ve worked to provide to one another and, in turn, to the entire PC(USA).”

The deep bond shared among the pastoral residents, as well as with their pastor-mentors and presbytery representatives, was evident as the members of each of the five cluster groups, representing the program’s six partner presbyteries, began their individual presentations on Wednesday afternoon, May 29.

Demonstrating the leadership gifts, technological skills, creativity, and humor that commended them to the program, the pastoral residents used song, games, an interactive representation of the connectional church, top 10 lists, and even a game-show parody to communicate the good news stories of their churches and communities. 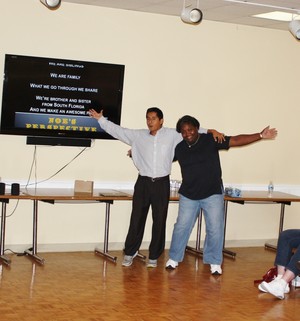 Noe Juarez (left) and CeCe Armstrong, "For Such a Time as This" colleagues in Florida. —Ken Meeks

With lyrics she wrote to the tune of “My Favorite Things” from The Sound of Music, Armstrong inspired laughter and cheers as she sang, “We’re brother and sister from South Florida, and we make an awesome pair!”

Addressing the group, she continued: “I want us to always find a way to get back together, because this is a very empowering group for me. You’re my family. I wish we could imitate this or bottle or sell it or give it away at the national level in order to redefine connectional for the larger church. So often in the church we tend to miss things because we’re not connected to each other and we don’t see the bigger picture. As the body of Christ, how can we not be connected?”

Armstrong and Juarez also praised their mentor, Joan Abell—who addressed the gathering via a prerecorded video—highlighting the critical and unique role of the program’s pastor-mentors in surrounding first-call pastors with a network of support.

“My goal has been to help CeCe and Noe to become the very best possible pastors, recognizing in each their individual gifts,” Abell said. “As I’ve watched them grow in self-confidence, our presbytery has benefited greatly by their presence and involvement. I believe this program will make a great deal of difference in the Presbyterian church. We will be stronger because of it and more effective communicators as we share the gospel of Christ with the world.”

Currently the For Such a Time as This leadership team is in the midst of its matching process for 2013, with residency placements expected to be announced by midsummer. The program’s fourth group of ministry settings comprise 13 small congregations—some in yoked or multipoint parishes—for a total of 11 residency placements in the presbyteries of Florida, Heartland, Missouri Union, Northern Kansas, Southeastern Illinois, Tampa Bay, and West Virginia. Having already witnessed the program’s impact, Heartland, Tampa Bay, and West Virginia are returning as presbytery partners.

“So many of our small, ’micro‘ churches are in deep grief because we are not what we were 15, 20, or 30 years ago,” said Craig Butler, transitional associate for Congregational Ministries for the Presbytery of West Virginia. “In places where our churches have been saying, ‘Woe is me. We’re dying. We’re done,’ For Such a Time as This has come in and now there’s life. Elizabeth [Campbell-Maleke] and Nancy [Didway], our pastoral residents in Williamstown, Waverly, and St. Albans, have breathed life into those congregations, and the other churches in the presbytery have seen it. The effect it has had on the presbytery is breathing hope into places of despair: no matter how hopeless they thought their situation was, new and exciting things can happen.”

Charles Wiley, coordinator of the PC(USA)’s  office of Theology and Worship, which oversees For Such a Time as This, told the gathering that plans are under way not only to continue the program  but also to broaden its impact. While For Such a Time as This was originally conceived as a four-year pilot program (2010–2013), funded in large part by an anonymous foundation, the Presbyterian Mission Agency has remained committed to the program’s continuation.

“We’re working to develop a new partnership model, where we would share the future costs and the administration of the program with the presbyteries, who are its main supporters and beneficiaries,” said Wiley. “While there will still be a national component of oversight and coordination—including moving the matching process to the PC(USA)’s Church Leadership Connection in order to broaden the pool of interested applicants—the new model will be designed to reflect and encourage increased ownership by the presbyteries. Our goal is to involve 25 congregations in For Such a Time as This by 2015.”

Presbytery leaders like Butler and Ken Meeks—who has just retired as general presbyter for Northeast Georgia Presbytery—say that they are ready to help other presbyteries discover the importance of the program, especially its pastor colleague groups, which help to ensure “survival in ministry.”

“This program, these people, strike a chord in me similar to what I feel when I’m at General Assembly and I’m around the Young Adult Advisory Delegates,” said Meeks, addressing the program’s class of 2011. “What I observed last June is what I see in you: something that gives me great hope. I see gifted people. I see committed people. I see people who have the courage of their convictions. Any way you can spread the word about this to other ministers, I applaud you for trying to get that point across. My hope is that together we can find a way for more churches to embrace this program and respond to it.”

Mary Jane Knapp, a pastor-mentor in the Presbytery of West Virginia, also voiced her support: “This is a time in the Presbyterian church when a lot of people are giving up on the church. I think this program is the ‘no’ to that.”