Carvalhaes to Lakes and Prairies Synod School: ‘Individualism is killing us’ 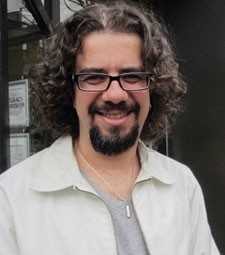 Theologian, liturgist, musician and artist Cláudio Carvalhaes, convocation speaker at the 60th Synod of Lakes and Prairies Synod School, had this message for the 616 people gathered July 21-27: “I know how you belong to God by the ways that you belong to each other.”

“Individualism is killing us,” Carvalhaes said. “Am I my brother’s keeper? Yes, I am. If you are hungry, I cannot sing a hymn. Unless you are taken care of, I will not sleep at night. Belonging to God,” he said, referring to the Synod School theme, “is not easy.”

Synod School, the last of its kind in the Presbyterian Church (U.S.A.), meets each summer at Buena Vista University. The event included 160 faculty, 174 youth and 149 first-timers.

Carvalhaes, who was born and raised in São Paulo, Brazil, is associate professor of worship and liturgy at Lutheran Theological Seminary in Philadelphia. He began many of his Synod School talks by strumming his guitar and leading the traditional Mexican folk song, “We Belong to God.”

At Synod School, he took on two topics important to many worshipers ― time and space.

It’s interesting, he noted, that many Christians dislike it when their Sunday worship service goes five minutes long ― but think nothing of a 30-minute wait at their favorite restaurant following worship.

As for our worship spaces, Carvalhaes advised Christians to set aside safety and predictability to create worship spaces “that will honor everybody. The Holy Spirit makes us be together. Because of you, I will see how God works in powerful, expansive ways. Let us find a place where difference is not a threat, but a place we can celebrate.”

Social media give us a “different way of belonging,” he said, a way in which power and authority are now far less hierarchical. “Before, the pastor helped you interpret. Now there’s a community of believers.”

Not everybody was buying that argument, however. When Carvalhaes held his smart phone aloft and said, “you can’t go anywhere without this,” a Synod School participant replied, “Wanna bet? I don’t own one. My phone hangs on the wall.”

Carvalhaes smiled and hugged her.

When he was a boy, Carvalhaes said his mother wouldn’t let him leave the house in the morning until he’d said a prayer and read from his Bible.

“Don’t leave your house without having your eyes shocked” by God’s active presence in the world, he said. “Really notice” God’s work, he advised. “You’ll be this nut ball in the public square.”

He completed his week with an old-fashioned altar call, inviting people forward to pray with them. “I don’t know if you’re used to that. You are Presbyterians, after all,” he said, but more than 100 people ended up joining him in the front of the chapel, their arms intertwined.

“I like to challenge my students,” he’d said during his first talk, “because learning happens in a place you are not comfortable.”

Mike Ferguson is a member of United Presbyterian Church in Lone Tree, Iowa, and a reporter for The Muscatine Journal, the newspaper where Mark Twain got his start. He is a regular contributor to Presbyterian News Service.