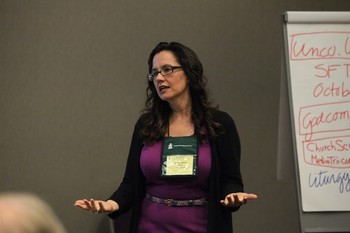 Community and relationships are positive outcomes in the growing online environment of the church, according to a group of leaders in who took part in a social media roundtable of the Presbyterian Communicators Network Aug. 2 at the Presbyterian Church (U.S.A.)’s Big Tent.

“We are in this incredibly creative time,” said Carol Howard Merritt, co-host of God Complex Radio and author of Tribal Church and Reframing Hope. Social media, she said, provides an avenue for people to “connect together to form communities.”

Merritt moderated a discussion in which participants sometimes referred to each other by their Twitter names — names created as an identity on Twitter, an online social networking service and microblogging service that allows users to send and read messages — called “tweets” — that are restricted to 140 characters.

The exchanges, at times, become an extended banter among friends, similar to what could take could take place in person.

Ryan Kemp-Pappan, a pastor and social worker in Oklahoma City, Okla., uses rk_p as his Twitter name. “Many of us are isolated in our communities,” he said. Twitter, he explained, “becomes a resource to bring us together.”

Kemp-Pappan said that Twitter and Facebook, another social networking service, have replaced email. “We can’t avoid this,” he said. “This is where it’s at.”

Derrick Weston, executive director of the Pittsburgh Project, a nonprofit community development organization serving the city’s most vulnerable residents, and co-host with Merritt of God Complex Radio, said connections developed online “are real relationships. They are not substitutes.”

From a ministry standpoint, Debra Avery, pastor of First Presbyterian Church in Oakland, Calif., described social networking as “a way of expanding our ministry.” Avery, who goes by jazzpastord on Twitter, said people are yearning for a way to be connected and that Facebook can provide a bridge for “taking a traditional church into a new age.”

The workshop was one of many under PC(USA)’s Big Tent Aug. 1-3 in celebration of its mission and ministry. Organized under the theme, “Putting God’s First Things First,” the event is composed of 10 national Presbyterian conferences, more than 160 workshops and special events to mark the 30th anniversary of the formation of the PC(USA) and the 25th anniversary of the opening of the Presbyterian Center.