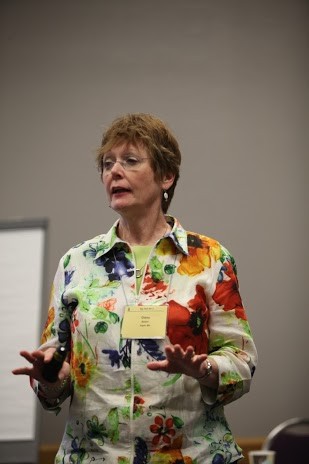 At a Big Tent workshop, Ruling Elder Diana Barber reminded ruling elders that their constitutional responsibilities stay with them whether they’re serving on session on not. —Danny Bolin

Ruling Elder Diana Barber, associate executive for leadership at the Synod of Lakes and Prairies and a member of Westminster Presbyterian Church in Minneapolis, well remembers her ordination, which occurred in 1980.

“I gave myself a Bible to commemorate the occasion,” she told the National Elders Conference at Big Tent Aug. 2.

Barber divided ruling elders’ ongoing responsibilities following their service on session into two categories: within and beyond their congregation.

“The most important thing we can do is figure out how we stay connected to what’s going on in church,” she said. At Barber’s church, ruling elders and deacons who are not currently serving meet twice each year for dinner as a “company of leaders.”

“I think it’s wise,” she said, “to keep the system going and information flowing ― even if your first desire is to go away for a while.”

Other duties within the congregation include being alert to issues in the pews, mentoring confirmands and new members, and counseling both active and inactive members.

“We have inactive members ― and active members ― who aren’t fully living out their vocation as believers,” she said. “Because we aren’t burdened with monthly meetings, we can have a role in counseling those members.”

There are plenty of opportunities beyond the congregation, including service as a commissioner to presbytery, synod or General Assembly; serving on a board or commission of one or more of those bodies; and representing the congregation in community and ecumenical positions.

But no matter how far afield service to the church takes you, there’s no place like home.

“Our congregation is always the place that grounds us,” she said. “It’s home.”