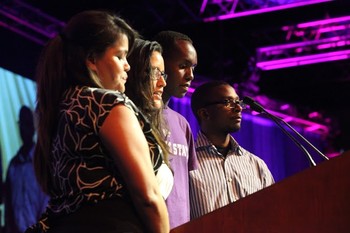 For those among the more than 1,700 registered attendees whose congregations are more homogenous, the experience has been both thrilling and confusing.

Which is why two-and-a-half days of workshops and prayers set out to help create a comfort zone for the uncomfortable.

And why, in some respects, Big Tent also created an uncomfortable zone for the comfortable.

“You will not be able to leave this place the same as when you came," predicted Peters.

The Presbyterians picked a good week to invite everyone to its hometown and explore itself as a multicultural church. On the streets outside the Kentucky International Convention Center, a gathering of automobiles provides a visual example.

Some are modern, some are clunkers. Added to the mix ― thanks to the simultaneous presence in Louisville of the annual National Street Rod Convention ― are a bevy of vintage automobiles, restored to their original beauty. Others are reproductions, their fiberglass bodies reminiscent of 1940’s-era Fords, Plymouths and other long-gone classics. Still others are unique and undefinable.

Yet, look under their hoods, strip away their bodies and you’ll find each car has an engine, drinking gasoline to fuel its 4-, 6- or 8-cylinders. Each car rides along on four tires, each filled from our common supply of air. Each car has a steering wheel to guide the wheels in the correct direction.

This week’s multicultural discussions were serious ― racism was on the menu several times ― sometimes discussed in level-headed terms, sometimes not.

But there was also music, there was art, there was dancing and there was levity. The Arab contingent jokingly posed the following question, “What language do they speak in heaven? Arabic, because it takes eternity to learn it!”

What growth pattern will multiculturalism exhibit in the coming year?

Some tantalizing signs can be seen in the 1001 New Worshiping Communities movement, a number of which are multicultural communities. And no doubt, more will be revealed in mid-June 2014 at the 221st General Assembly 221 in Detroit, if not before.