A conversation with Dean Lewis 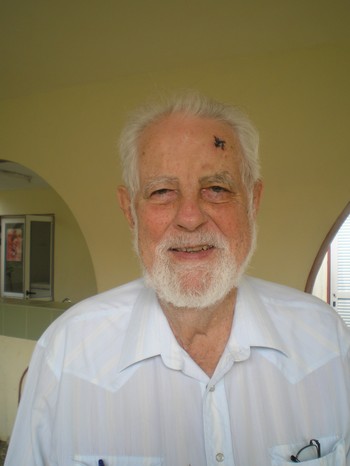 At age 88, Dean Lewis doesn’t know how many more trips to Cuba he has left. But over the course of more than 40 trips since his first visit to the island in October 1990  one thing is certain: no Presbyterian has gained keener insight into or made more friends with Cuban Presbyterians.

Lewis, who now lives in Santa Fe, N.M., first attempted to visit Cuba in 1967. “I was granted a sabbatical (by the former Board of Christian Education of the UPCUSA) and thought I wanted to spend it in Cuba, which proved to be impossible, but I never lost interest,” he told the Presbyterian News Service in a Jan. 31 interview on the campus of the Seminario Evangelico Teologia (Evangelical Theological Seminary, or SET) here.

In 1969, while serving as the director of the then Advisory Committee on Church and Society, Lewis worked on two Cuba-related resolutions to the General Assembly: one on ending the U.S. embargo, which was then less than 10 years old; and one on closing the U.S. naval base at Guantanamo, on the eastern end of Cuba. During that work he made his first Cuban Presbyterian friend, the Rev. Manolo Rodriguez, an expatriate pastor who had left the island shortly after the 1959 revolution.

The 1990 General Assembly included a celebration of the 100th anniversary of Presbyterianism in Cuba, featuring two Cuban pastors: the Revs. Hector Mendez and Carlos Camps. Lewis, now retired from General Assembly work and serving as program director for Ghost Ranch, got to know Mendez and Camps and later that fall accompanied Manolo Rodriguez on his first return visit to Cuba.

“In 1990 there wasn’t much awareness in the PC(USA) of the Presbyterian Church in Cuba,” said Lewis of the Presbyterian Reformed Church in Cuba (IPRC) which had become independent of its “mother church” in the U.S. in 1967. “After the revolution, attention in the U.S. was focused on resettlement of Cuban refugees and the rest, the ‘remnant’ church still surviving in Cuba, was lost,” he said.

During that 1990 visit, Lewis befriended Rene Castellanos, a legendary Cuban Presbyterian theologian and folk-dance teacher who died in 2012 at age 97. He invited Castellanos to come to Ghost Ranch, which began an uninterrupted string of annual summer visits by “El Maestro” to Ghost Ranch and the Synod School of the Synod of Lakes and Prairies spanning the next 20 years.

Also during Lewis’ initial visit to Cuba, Mendez and Camps proposed a mission partnership between the IPRC and Santa Fe Presbytery. That partnership was approved in 1991—during Castellanos’ first visit to Ghost Ranch—and was quickly followed by four other presbytery partnerships with Cuban churches: Long Island, South Louisiana and Transylvania.

The PC(USA) and IPRC scheduled a “mission consultation” in Cuba in 1995. The four PC(USA) presbyteries already in partnership relationships in Cuba were invited to attend as “observers,” the still-rankled Lewis recalls. “There were just too many regulations imposed by Louisville,” Lewis says, so at the end of the consultation, back in Miami on their way home, the presbytery “observers” met and formed the Presbyterian Cuba Connection.

Incorporated in New Mexico, the stated purposes of the connection are to keep in touch with each other about partnership developments in Cuba, to educate U.S. Presbyterians about Cuba and Cuban Presbyterians, to generate financial support for the Cuban churches and to foster new partnerships.

At least partly due to the Presbyterian Cuba Connection’s efforts, there are now more than 80 partnerships between PC(USA) and IPRC congregations and presbyteries, and 15 other partnerships involving PC(USA) presbyteries as well as organizations such as Living Waters for the World, a pure water ministry of the Synod of Living Waters, and the Outreach Foundation. The Presbyterian Cuba Connection has also raised more than $1 million for the work of the IPRC.

What keeps Lewis going? “I am inspired by the perseverance, vitality and faithfulness of the Cuban church,” he says. “For many years, I have talked with our Cuban partners about declaring a ‘zone of peace’ between the U.S. and Cuba. As long as this stupid blockade is in place, I just don’t feel like I can rest.”

Lewis says he has also “come to love individual Cuban Presbyterians for their undiluted testimonies to Christian faithfulness, for the fidelity of the ‘remnant’ here.”

As in the U.S., the future of Presbyterianism in Cuba is uncertain, Lewis says. “Protestantism, already a tiny minority, is really diffuse. The churches cannot seem to speak with one voice. Meanwhile, the Roman Catholic church is monolithic and better positioned to thrive,’ he says.

While it has experienced steady growth since 1991—when then-president Fidel Castro reached a rapproachment with Cuba’s churches that greatly expanded religious freedom—last year the IPRC for the first time registered a net membership loss. While it was miniscule, that loss is troublesome, Lewis says.

“There is a shortage of Presbyterian pastors in Cuba and the younger ones didn’t grow up in the ‘wilderness’ years of government oppression of the church,” he says. “Without the discipline and institutional memory of the older pastors, there is somewhat of a crisis in leadership.”

The Presbyterian Cuba Connection, which in 2000 spawned the Cuba Mission Network to expand the reach of PC(USA) partnership in Cuba, continues to seek the best ways to partner with Cuba’s Presbyterians. Lewis says he welcomes partnership with World Mission, the global ministries arm of the Presbyterian Mission Agency.

“Most of the financial support for Cuba mission comes from partners, not the denomination,” he says, “and the partners have longer and deeper connection and understanding with Cuban Presbyterians.”

Though praising the ministries of World Mission’s liaison for the Caribbean the Rev. Jo Ella Holman and her predecessor, the Rev. Tricia Lloyd-Sidle, “the partners should have an organic tie to the denomination—it would strengthen both,” Lewis says. “The partners don’t fit into denominational polity anywhere,” he says, “and that’s wrong.”