Home News Blessed are the peacemakers

Blessed are the peacemakers 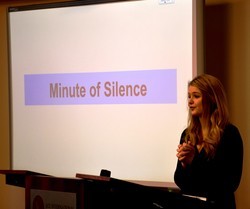 The LCC symposium on Ukraine began with a moment of silence for the Maidan victims in Kiev, Ukraine. —Courtesy of Eric and Rebecca Hinderliter

These are tumultuous times for Ukraine, for the Ukrainian students at LCC International University here where we serve, and indeed for all of us.  The news is dominated by threats and rumors of war; we fear being overtaken by events.

As teachers, our students look to us for advice and reassurance; they ask us what will happen next.  In their eyes we know they are looking for hope.  But how can we possibly give reassurance in the face of such complex and rapidly changing events?  When the news changes by the hour, what can we offer that will endure?

In 2004 the school launched an “Eastern Initiative,” a systematic effort to recruit students from the former Soviet countries to the east of Lithuania.  Today just over half the LCC student body come from these countries; students from Ukraine are about 15 percent of all LCC students.  And LCC’s Russian student contingent is nearly as large.

The economic situation in Ukraine is dire. Ukraine's currency, the hryvnia, has already fallen to a new low against the U.S. dollar. Predictions point to a possible 25 percent depreciation this year. The currency's decline reflects political upheavals and longer-term persistent economic weakness. Too little reform of the former state-controlled Soviet economy has been achieved. Ukraine needs large and continuing international financial assistance to pay its bills.

It is amazing to consider that the economy is still smaller than it was in 1992, the beginning of Ukrainian independence from Moscow (BBC World Service, February 27, 2014). But the conflict is not all about Ukraine.  The importance of Ukraine in the Russian worldview cannot be underestimated: “Russia sees Ukraine as part of its own identity,”; its move to the west —its “return to European civilization”— a “threat to Russia’s conception of itself.” Overall Ukraine is enveloped with a “haze of propaganda.” (Chatham House).

In this part of the world Nov. 21, 2013, was a day of surprises. Just as we were talking in class about the possibility of reform in Ukraine, students glumly reported that the Ukrainian government had unexpectedly rejected closer economic and political ties with the European Union.  Students’ hopes for progress were dashed.

Students pressed their questions about Ukraine to a Lithuanian diplomatic expert. —Courtesy of Eric and Rebecca Hinderliter

Tensions have risen since November. The protests and the violence on Maidan Square in Kiev, Ukraine, were broadcast live. Students need a safe place to talk about these issues. LCC students in my international economics class this spring organized a forum on the international economic relations of Ukraine.

A diplomat from the Lithuanian foreign ministry involved in the failed EU-Ukraine trade negotiation explained the trade deal. Students from Lithuania, Russia and Ukraine filled the room. While there was confusion and suspicion about the origins of the conflict in Ukraine, an equal amount of openness to learning about the realities of history and the ambiguous nature of “right” and “wrong” in complex economic, political and historical relations was evident.  Peace, we believe, requires both goodwill and understanding of the “other” party.

Years ago I led a Kerygma course on the Bible theology of peace. Peace in the Bible is not passive. God is active in the world today in bringing about his intention of peace, Shalom, for his creation. “Shalom is active, not passive, we don’t just accept it, we must also do it.”' (Gowan 1984). We are called to work earnestly for peace.

This is a time to recall our Reformed heritage of being sent into the world to work for justice and for peace. This is the reassurance that we can offer to our students and to the world. The 1977Declaration of Faith of the former Presbyterian Church in the United Sates offers timely guidance:

God sends us to work for peace.
God has brought out of the horrors of warfare
the judgment and deliverance of nations.
Yet the Lord has condemned the atrocities of war
and warned his people not to trust in military force.
The Prince of Peace does not bring in his rule by force.
The Lord is moving toward a time
when nations will not learn war any more.
We affirm God is at work here and now
when people are ashamed of the inhumanity of war,…
(and) seek other ways of settling international disputes.…
It is our duty to attack the causes and the roots of war,
to unmask the idolatry that places national security above all else,
to urge all nations to devote to making peace….
AMEN

Many of you have written to us in recent weeks to ask about Ukraine. Some of you have met students and teachers from Ukraine and Russia on your mission trips to Lithuania.  Please do join us in prayers for the people. We hope that your partnering with us gives you reason to hope. Thanks for your gifts to world mission. Pray for peace and reconciliation.