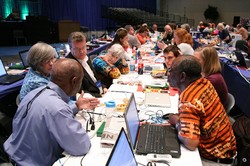 Commissioners and Advisory Delegates broke out into small groups to discuss Marriage and Middle East Issues to begin plenary VII at the 221st General Assembly (2014) of the PC(USA) in Detroit, MI on Thursday, June 19, 2014. —Danny Bolin

After clearing a number of procedural hurdles, the 221st General Assembly (2014) of the Presbyterian Church (U.S.A.) agreed to grant pastors discretion in determining whether or not to conduct same-gender marriages in civil jurisdictions where such marriages are legal.

The action effectively removes the ban on Presbyterian pastors marrying same-gender couples in those jurisdictions.

The vote on the authoritative interpretation – which takes effect immediately – was 371-238 or 61 percent to 39 percent.

The vote on the proposed constitutional amendment – which goes to the denomination’s 172 presbyteries for ratification – was 429-175 or 71 percent to 29 percent. A majority of the presbyteries must vote approval of the measure for it to take effect.

Commissioners apparently agreed with speakers who argued that ministers must have pastoral discretion around marriage decisions, particularly in the 19 states and the District of Columbia where same-gender marriage is legal.

The direction of the authoritative interpretation debate was set by Teaching Elder Brian Franzen of San Jose Presbytery, who said, “The church has to be a place that welcomes all people. The only way to do that is to allow pastors to use their conscience.”

The desire to grant pastors greater discretion on marriage decisions outweighed the concern of those backing Teaching Elder Jim Miller of Eastern Oklahoma Presbytery who said “the fragile unity of the church is at stake.”

The full text of the authoritative interpretation (of W-4.9000) of the Book of Order:

“Worship is a central element of the pastoral care of the people of God (W-6.3001, W-6.3010) in which a teaching elder’s discernment of the leading of the Holy Spirit is indispensable. The necessity of ensuring the exercise of freedom of conscience in the interpretation of Scripture (G-2.0105) in the planning and leadership of worship has deep roots in our Reformed tradition and theology. Because a service of marriage is one form of such worship, when a couple requests the involvement of the church in solemnizing their marriage as permitted by the laws of the civil jurisdiction in which the marriage is to take place, teaching elders have the pastoral responsibility to assess the capabilities, intentions, and readiness of the couple to be married (W-4.9002), and the freedom of conscience in the interpretation of Scripture (G-2.0105) to participate in any such marriage they believe the Holy Spirit calls them to perform.

“Exercising such discretion and freedom of conscience under the prayerful guidance of Scripture, teaching elders may conduct a marriage service for any such couple in the place where the community gathers for worship, so long as it is approved by the session; or in such other place as may be suitable for a service of Christian worship. In no case shall any teaching elder’s conscience be bound to conduct any marriage service for any couple except by his or her understanding of the Word, and the leading of the Holy Spirit.”

The Assembly ― like its Assembly Committee on Civil Union and Marriage Issues ― was careful to protect the consciences of pastors on both sides of the same-gender marriage issue.

In addition to the protective language at the conclusion of the authoritative interpretation, the Assembly included a clause in the proposed amendment stating: “Nothing herein shall compel a teaching elder to perform nor compel a session to authorize the use of church property for a marriage service that the teaching elder or the session believes is contrary to the teaching elder’s or the session’s discernment of the Holy Spirit and their understanding of the Word of God.”

The Assembly also reached out to Presbyterians who will certainly struggle with the proposed new definition of marriage. The words “traditionally between a man and a woman” were added by an amendment offered by Teaching Elder John Wilkinson of Genesee Valley Presbytery.

“Anything we can do to support those who hold to the traditional understanding of marriage, we should do,” Wilkinson said.

A move to appoint a task force to study the issue of same-gender marriage for two years rather than take any action at this Assembly failed 372-237 or 61 percent to 39 percent.

At a press conference following the votes, General Assembly Moderator Heath Rada said he expects to spend much of his time during the coming year seeking to reconcile Presbyterians who disagree on same-gender marriage. "When Presbyterians gather, they tend to talk more about what holds us together ― the same faith in Jesus Christ.” An experienced mediator, Rada said he hopes to use those skills to hold the church together.

General Assembly Stated Clerk Gradye Parsons acknowledged the historic decisions made by the Assembly. “The conversations about sexuality began in 1978,” he said, referring to an authoritative interpretation that year that declared “homosexuality does not accord with God’s plan for humanity.”

“There have been places along the way when our talk turned to action, and this is one of those days,” Parsons said, adding that “both the church and the society have changed – more people are getting to know gays and lesbians, laws are changing and pastoral situations are changing.”

Read this article in Korean.