Presbyterians launch 'Educate a Child' initiative to 'Transform the World' 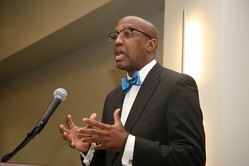 J. Herbert Nelson II was guest speaker of the Educate a Child, Transform the World luncheon at the 221st General Assembly (2014) of the PC(USA) in Detroit, MI on Thursday, June 19, 2014. —Danny Bolin

Presbyterians hope to provide quality education to 1 million children in the U.S. and around the world in the next four years – as a way to alleviate poverty, especially for women and children.

That was the primary message at the “Educate a Child, Transform the World" luncheon attended by some 150 people during the 221st General Assembly (2014) of the Presbyterian Church, (U.S.A.).

Sponsored by World Mission and Compassion, Peace and Justice ministries of the Presbyterian Mission Agency, the initiative is before the Assembly for approval.

Frank Dimmock of the mission agency emphasized that the initiative is a “gateway out” for people trapped in poverty.

“We expect proposals from churches in every region of the world,” he said. “There’s a high school for girls in the church of Bangladesh. Middle East partners hope to educate thousands of refugee children in Syria.”

In the Democratic Republic of Congo, 230,000 children are already being affected by work underway. Jan Sullivan of the Presbytery of Chicago coordinates the Congo Education Excellence program.

“They don’t have textbooks, schools are falling down,” she said. “But Joseph Mulumba, the general secretary of the Presbyterian Church of Congo, presses on, believing all students deserve a Christ-centered education.”

Already this week, PC(USA) congregations have pledged $1.65 million to work on a peacemaking and education project proposed in South Sudan. Another proposal, from the Presbyterian Church of Central Africa, would address a shortage of schools and teachers in Malawi, Zambia and Zimbabwe.

J. Herbert Nelson of the PC(USA)’s Office of Public Witness spoke about the need for quality public education in the United States, calling it “shameful” that only 18 percent of schools are expected to meet basic reading standards of No Child Left Behind this year.

“Too often the dividing line of education runs through the intersections of poverty and race,” Nelson said.

Nelson visited Urban Promise, a Christian-based urban school program in inner city Camden, New Jersey, which has one of the highest crime rates in the nation.

Through this relationship, the school and the church formed a learning academy that includes a charter school that helps troubled, at risk children navigate dangers on the streets – and in dysfunctional home and community environments.

“As long as there’s a church on the corner, one person can make a difference,” said Nelson to loud applause. “No child should be left behind, every child should be able to learn, make a way church of Jesus Christ – make a way for that to happen.”