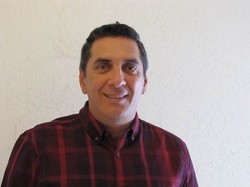 Valdir França has joined Presbyterian World Mission as area coordinator for Latin American and the Caribbean. He will begin his duties at the Presbyterian Center in Louisville on Sept. 15.

França succeeds Maria Arroyo, who worked with Presbyterian World Mission for 25 years. The position of area coordinator is a key role in World Mission.

França will serve as the liaison with the global partner churches in Latin America and the Caribbean, providing support and serving as a bridge between global church partners and U.S. Presbyterians. In this role França will also help to supervise and support the mission co-workers serving in Latin America.

Greg Allen-Pickett, general manager for World Mission, believes that França is uniquely equipped to serve in this vital role. “I am very excited for Valdir to join our team. He brings an incredible depth and breadth of experience with him to this role. He will bring the perspective of our global partners to the leadership team of World Mission through his own experience of growing up, attending seminary and pastoring churches in Brazil.

“He also brings experience serving as a missionary, experience in local U.S. congregations, and experience working for a mission agency. We are confident that Valdir will make a positive impact in World Mission, building on the legacy of Maria Arroyo, to be an effective and faithful partner in God’s mission with U.S. Presbyterians and our global partners in Latin America and the Caribbean.”

For the past five years, França has served with Latin America Missions and for the Reformed Church in America as the supervisor for Mission in the Americas.  He has a Th.B from Northern Presbyterian Seminary; a Th.M. in missiology from the Evangelical Center of Mission, both in his native Brazil; and a D.Min. from Columbia Theological Seminary in Decatur, Ga.

Born in Southern Brazil and raised in Manaus, Amazon, he became a Christian and Presbyterian as a teenager. After completing his theological studies, he was ordained as a minister in the Independent Presbyterian Church of Brazil in 1984. He also served as an adjunct professor and director of missions at Faculdade Teologica Sulmericana (South American Theological Seminary).

In the late 90s he was a missionary in Birmingham, England, serving in a variety of multi-cultural urban ministries. In 2002 he moved to the United States, working with new church development among Portuguese speaking immigrants in Florida. He also ministered to two Spanish-speaking congregations.

Valdir França is married to Maria Eugenia Cornou, a native of Argentina, and has two children.