Life beyond a trust fund

Church engages in new beginnings, discovers 'God is with us' 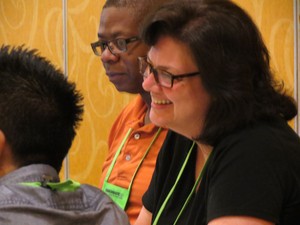 Sue Trigger’s eyes well up with tears. “Ministry is not easy,” she said. “So when you get to be part of something where you feel spiritual energy, it’s phenomenal.”

Just moments earlier, Trigger’s face had been transformed by a smile.

“God is doing something in me,” she said. “For the first time in ministry, I feel confident God is with us in what we are doing in a very big way.”

Being pressed on what a powerful statement this was released many emotions for Trigger.

In the midst of declining membership and resources, she and her husband, Mitch, along with the congregation they co-pastor, were at the bottom of their life cycle together in 2011.

Financially, First Presbyterian Church in Rockaway, New Jersey, was going to run out of money in two to three years if things kept going like they were. At times it felt as if a trust fund was the only thing keeping them alive.

So the members of First Church made a commitment to one another. They would break out of their comfort zones and become one of 13 churches in the Presbytery of Newton to go through a discernment process called New Beginnings.

The Presbyterian Mission Agency resource empowers congregations to make meaningful decisions about their future — of how they might do mission and ministry in their neighborhood.

“New Beginnings helped us recognize two areas of work we had to do,” Trigger said. “Before we could do anything new, we felt God asking us to build healthier relationships by addressing patterns of conflict and the need for spiritual formation.”

The New Beginnings process helped First Church write a vision of the kind of church community God wanted them to be. “Spiritual growth, prayer, listening to the Holy Spirit, discerning where God was leading, evangelism,” were some of the things they wrote.

At the request of the congregation, Trigger, who spent 13 years as a Christian educator, designed curriculum for small-group ministry to help people reconnect to God and each other through Bible study and prayer.

In early 2013, she went to the annual Association of Presbyterian Christian Educators (APCE) event, wondering what curriculum to use next in small-group ministry.

“We were so drawn to evangelism, but I had no idea what to do,” she said.

Mission agency evangelism coordinator Ray Jones just happened to be at APCE that year. He was doing training for Presbyterians Organized in Nurture and Teaching (POINT) on a new approach to evangelism called Engage.

“I love how God works,” Trigger said. “I’m a POINT volunteer. As soon as Rays starts talking, I know Engage is going to be perfect for our congregation.”

Initially, First Church was nervous about the Engage: Gospel curriculum. It had that that “big, scary evangelism word” and talked about people sharing their own faith stories.

“We’ve gone from people saying, ‘I can’t’ or ‘I don’t want to’ or ‘I don’t have a faith story’ to receiving a manila envelope from one of our small groups,” Trigger says. “It was full of these amazing stories of God at work in and through their lives.” 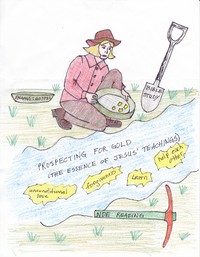 Trigger plans to celebrate this on Evangelism Sunday (Sept. 28, 2014). Some stories will be shared personally; others will come alive through narration and visual images in worship.

“We are beginning to see how our faith stories are uniquely woven together in the life of this congregation,” she said. “How cool is that?”

What Trigger has come to realize is that “she didn’t have a clue” about where First Church was going.

“I didn’t feel like I had any special gifts or skills in discerning a vision,” she said. “Gradually I began to let go of the ‘right’ strategies, the ‘right’ books — it was huge for me as an educator, because I always thought, ‘Just give me the right resource and I can figure this out.’

“But now my husband and I say to the congregation, ‘Let’s go pray. Let’s listen to the Holy Spirit.’”

More and more, Trigger finds that she and Mitch are not telling First Church what to do. Instead they are like cheerleaders, encouraging the congregation to celebrate even what it thinks are failures.

First Church has reduced what it is using from that trust fund. They’re talking now about their third year of ministry not as their final year, but about how it will lead to a fourth year, a fifth and beyond.

Triggers credits New Beginnings for giving First Church a structure to evaluate its education ministry based on its desire for spiritual formation. By switching to the Feasting on the Word curriculum for Sunday school, the adult class grew from a handful to as many as 25.

Trigger also points out that in the past year, as it was learning that it had a faith story to share, First Church took in 14 new members.

“It’s so exciting to see the change,” she said. “Our potential for life — we weren’t always sure we were going to be here much longer.”