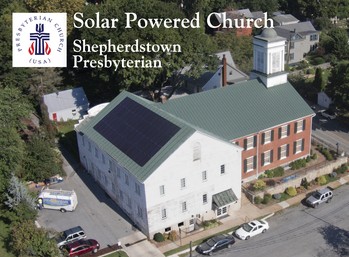 A Presbyterian church in West Virginia just got 60 solar energy panels installed on its roof for $1, thanks to a local group that’s making it easier and cheaper for nonprofits in the state to go solar.

At a ribbon-cutting ceremony Aug. 26, Shepherdstown Presbyterian Church ― a certified Earth Care Congregation of the Presbyterian Church (U.S.A.) ― became the site of the largest community-supported solar system in West Virginia, at the same time kicking off a model to bring solar energy to West Virginia nonprofits that’s being pioneered by local group Solar Holler.

Mosaic sells the electricity service created by the water heaters network to the grid, and pays the people who installed the controllers $100 out of the money it makes through selling the service.

Instead of keeping the $100, all the people who installed the controllers in Shepherdstown agreed to put it towards the church’s solar panels, which will provide about half the energy the church needs each year.

Dan Conant, who founded Solar Holler, told ThinkProgress that it wasn’t hard to convince members of the community to install the controllers, or to have them donate the money they earned from it. Most of the people who installed the controllers were church members, he said, and they wanted to see their church get its solar system.

“This is a really really cool community, and this actually wasn’t a hard sell at all,” he said. “From their perspective, they’re helping make this really cool, cutting edge project happen, and they didn’t have to write a check. We actually didn’t take any donations at all, for the entire system — it was just through Mosaic controllers that we raised all the funding we needed.”

Than Hitt, a member of Shepherdstown Presbyterian Church who worked with Solar Holler to help get the project started, said the idea to put solar panels on the church started with a brainstorming session among church members a few years ago.

He said members of the church have long wanted to install solar panels on the church, but didn’t know how they would be able to manage it until they found out about Solar Holler. The church members were interested in solar’s economic benefits, but they also wanted to reap the environmental benefits the panels would bring.

“There’s certainly a common understanding that we’ve got to be good stewards of the environment — it’s a Christian value, but it’s really a human value,” Hitt said. “It’s something that resonates with people, and it’s something that we know we need to do, especially in West Virginia.”

The church project is the first of what Conant hopes will be many crowd-funded solar installations at nonprofits in West Virginia. The next installation will be at the Bolivar-Harpers Ferry Library in Harpers Ferry, W.V., about 12 miles southeast of Shepherdstown. Conant said the group has about six more projects lined up for after the library is completed, and ultimately he wants to have a community-supported solar project at a nonprofit in all 55 counties in West Virginia within the next five years.

“We wanted to pave the way and create a model and scale this up all around West Virginia, because we really need it in our state,” he said. “It’s been really cool to see how much interest and excitement there is in West Virginia — I’m sure outside the state you wouldn’t expect that, but there’s a whole lot of folks who really care and want to help transition the state not just environmentally, but also economically.”

He’s excited for what the Shepherdstown solar project will bring to the community, and happy to see that the community shares his excitement. More than 100 people came to the ribbon-cutting ceremony, he said, including the fourth and fifth grade classes from Shepherdstown Elementary School. The principle of the school announced during the ceremony that solar energy would start building in renewable energy to their science classes this year.