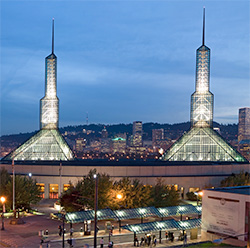 Presbyterian identity, environmental issues, and the election of at least two top denominational leaders will be among the matters of business topping the agenda of the 222nd General Assembly (2016) of the Presbyterian Church (U.S.A.).

“We have some big issues coming to this assembly,” said Gradye Parsons, Stated Clerk of the General Assembly. He encouraged presbytery leaders to train their commissioners well before sending them to Portland. “Help those folks be prepped so they can bring their best.”

Meeting in Portland has historic significance, said Tom Hay, director for assembly operations. The first General Assembly west of the Mississippi River was held at First Presbyterian Church in Portland in 1892.

In 1967, the assembly met in Portland and adopted The Confession of 1967. Special events are planned at next year’s assembly to highlight this confession. 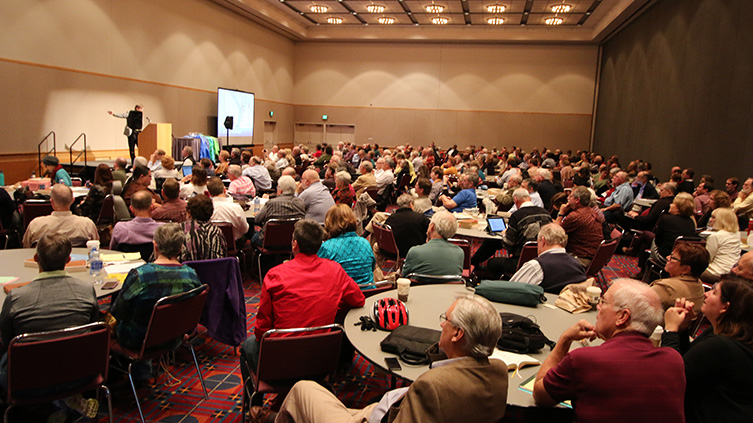 Assembly business will be divided among twelve committees—and for the first time in many years, Hay said, there will not be a committee assigned to deal with sexuality issues. “Yes, Presbyterians can get together and not talk about sex,” he quipped.

Commissioners will elect a new Stated Clerk to succeed Parsons, who has announced he will not stand for reelection, and possibly a new Executive Director of the Presbyterian Mission Agency (PMA). Tony de la Rosa has been named interim director of PMA, but the length of his term has not yet been determined.

One of the first items of business in Portland will be the election of a Moderator of the 222nd General Assembly (2016). No candidates have been announced as yet, Hay said.

One of the assembly committees, named “The Way Forward,” will consider the identity and purpose of the Presbyterian Church (U.S.A.). “There’s this whole subset of conversations in the church about where we are going as a denomination,” Hay said.

The Committee on the Office of the General Assembly (COGA) has issued an open invitation to Presbyterians to talk about such questions as: What does it mean to be Presbyterian? Who is the church called to be in this day and time? How should the denomination serve into the future?

A downloadable discussion guide will be available October 23, and Presbyterians may sign up in advance at pcusa.org/identity to receive an online form to share their thoughts.

“We want everybody in this conversation,” Parsons said.

Hay encouraged mid council leaders to identify people with valuable ideas who might need encouragement to participate in the discussion—“campus ministry groups, immigrant communities, folks not involved in the mainstream—the more people who get involved, the better it is for the church.”

Heath Rada, Moderator of the 221st General Assembly (2014), also has issued a call for conversation about the future of the church. The Presbytery of Foothills in South Carolina has submitted eight overtures offering a new vision for operations of the General Assembly.

Other business will include a final vote on adding the Confession of Belhar to the Book of Confessions, consideration of a revised Directory for Worship, Middle East issues, and issues related to fossil fuels and the environment.

Hay said Rada has suggested that meetings of the assembly committees open with Bible study, and a study resource is being prepared. There will be opportunities for others attending the assembly to participate in Bible study as well.

Rather than using buses to shuttle commissioners from hotels to the convention center, assembly planners are encouraging the use of public transportation. Everyone who registers for the assembly will receive a pass that can be used for light rail, bus, or trolley.

“It will be a huge savings of money—about $50,000—by using light rail rather than buses,” Hay said. And, “it is an environmental witness.”

Beth Neel, co-pastor of Westminster Presbyterian Church in Portland and co-moderator of the Committee on Local Arrangements (COLA), said OGA and COLA are working together to provide “a child-friendly room” at the convention center—with rocking chairs, a refrigerator to store baby formula, and other items for families with young children.

The COLA also is organizing a gift project, Neel said. People coming to the assembly will be asked to donate gift cards for people experiencing homelessness.

In addition to a snapshot of the upcoming assembly, the closing day of the Polity Conference offered a variety of workshops—on leadership competencies, use of technology, essential functions of a presbytery, and other topics.

“You guys are our front line,” Kraus told workshop participants, most of whom had worked previously with PDA following disasters in their synods or presbyteries.

Danny Murphy, general presbyter of Trinity Presbytery in South Carolina, said his presbytery is forming a disaster response team to respond to the massive flooding in the state.

“I’ve lived in South Carolina for twenty years and I’ve never seen anything like this,” he said. “We received six months’ worth of rain in two days. We have a lot of folk who have lost everything, and many do not have flood insurance.”

Murphy said it “was a breath of fresh air” when Turner called him offering PDA assistance soon after the flooding began. “I didn’t know what I was doing,” he said. “Thank you for reaching out to us right away.”