In a time of change and uncertainty, the Texas-based mid council votes to invest in the future of the church 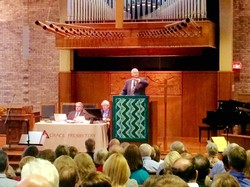 In this time of change and uncertainty for the denomination, Grace Presbytery in central and northeast Texas has decided to invest in the future of the church by donating $2.85 million to Presbyterian World Mission. The presbytery met and voted Thursday afternoon on a comprehensive proposal to strengthen mission through leadership development, seminary education, Hispanic outreach, the Young Adult Volunteer program and mission co-workers.

The money came from a legal settlement in September 2014 in which Highland Park Presbyterian Church of Dallas agreed to pay Grace Presbytery $7.8 million in exchange for a release from the PC(USA)’s trust clause and for ecclesiastical dismissal from the denomination.

“It was an unexpected gift to us,” says general presbyter Jan DeVries. “We felt strongly that the money should be used to strengthen ministry and not just our operating budget. We felt the responsibility to be involved in supporting the larger church and in growing our young adult leaders.”

The subcommittee that reviewed and made the recommendations included the Rev. Stuart Baskin, the Rev. Susan Sytsma Bratt, ruling elder Kathy Jones, ruling elder Dan Klein, the Rev. Karl Travis, ruling elder Charles Weaver, Barbara Arnett, and staff Jan DeVries, Mike Thompson (associate general presbyter) and Ken Johnson (treasurer). “It was an amazing, energetic group that made this recommendation, one that believes in the power of mission,” says DeVries. Like several others in the group, she is a life-long Presbyterian, and she knows that “money and mission go together,” she says. “It’s in my bones.”

"The older I get, the clearer I am," said Karl Travis. "Mission is who we are and why we matter. So its refreshing to see a judicatory lead the way in sacrificial generosity."

While Grace Presbytery has traditionally been one of the denomination’s top 10 presbyteries supporting the Presbyterian Mission Agency, Thursday’s gift was noteworthy as it is the equivalent of three times the presbytery’s annual budget. By partially funding two mission co-workers in perpetuity, the donation enables the presbytery to build long-term relationships with mission co-workers and helps the Presbyterian Church (U.S.A.) keep global mission a priority at a time of budget shortfalls and the reconsideration of mission priorities.

World Mission Director Hunter Farrell adds, “Grace Presbytery’s action today is the result of visionary leadership committed to engaging their congregations in faithful and effective mission. Grace has opened up a model for other presbyteries to transform the pain of congregational departures and closures into the joy of engaging together in Christ’s mission.”

In addition to the funds for World Mission and the Young Adult Volunteer program, the designated monies will be used: