Presbyterian Church (U.S.A.) leaders renew call for gun control in the wake of the Oregon shootings 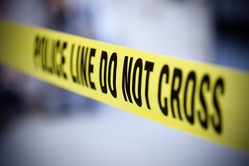 Once again, the nation finds itself reeling from another mass shooting. Authorities in Roseburg, Oregon are still investigating what led a 26-year-old man to open fire at the Umpqua Community College, killing nine people and injuring at least seven others in the remote northwestern community. The shooter, identified as Chris Harper Mercer, was killed by police during the rampage.

The shooting has once again raised the issue of gun control across the nation, prompting the Presbyterian Church (U.S.A.) to issue a new call for prayer and action.

“We mourn with the families of those who lost their lives in this senseless shooting and pray for God’s comfort over the entire community,” says the Rev. Gradye Parsons, stated clerk of the PC(USA)’s Office of the General Assembly. “We also denounce this act of violence, and urge those in power to push stringently for gun control.”

Roseburg is described as a former timber town nearly 200 miles south of Portland, where the PC(USA)’s 222nd General Assembly 2016 will be held.  Approximately 3,000 students attend the community college. This is not the town’s first encounter with gun violence. Authorities say a local high school freshman shot and wounded another student in 2006.

“This was the 45th shooting at a school in 2015 and the 142nd shooting since Sandy Hook,” says Carl Horton, coordinator of the Presbyterian Peacemaking Program. “As we as the church prepare to gather around a wide table this World Communion Sunday, may we strengthen our resolve to work to end violence in all of its forms.”

Meantime, Jim Kirk and Sally Dyer, volunteers with the Presbyterian Disaster Assistance National Response Team, are headed to Roseburg this weekend to meet with the Synod of the Pacific and Presbytery of the Cascades as well to as worship with members of First Presbyterian Church in Roseburg on Sunday. PDA will be offering its support and council, as needed, to church officials.

PC(USA) church leaders are asking Presbyterians to remember the victims and their families in prayer during this time and have posted a prayer by the Rev. Dr. Laurie Kraus, PDA coordinator, on the PDA website.