Immigrant son discovers opportunity, education and ministry in the PC(USA) 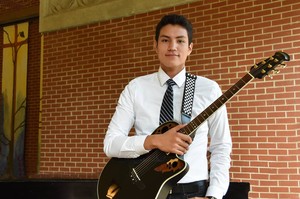 Caleb Chincoya with his guitar after undergraduate chapel at the University of Dubuque. —Nicky Story

If it’s true—according to the favorite children’s hymn—that “all God’s creatures got a place in the choir,” then Caleb Chincoya is an overachiever. The multi-talented, 21-year-old college senior takes up at least five spots—guitar, bass, congas, drums and piano—in the band.

Chincoya, a computer information technology major at the University of Dubuque, traces his love of music to the profound influence and considerable gifts of his uncle Lemuel Velasco, with whom he and his mother moved to the U.S. from Mexico when Chincoya was just six years old.

“When we first came to the U.S., my uncle was the worship leader at the church we were in, and I just really enjoyed the beat of the music in general,” Chincoya said. “I started off with the congas when I was six or seven, and then, when I saw my uncle playing the guitar, I just picked it up and messed with it until I got it. My uncle taught me the mechanics, but rhythm was always natural to me.”

Chincoya’s goal in high school—where he served as assistant to the band teacher—was to learn as many instruments as possible. But all toward a specific end.

“God has given me the gift of music and I’ve been trying to use it in my life,” said Chincoya. “When I look at the talents that I have, I ask myself, ‘How am I using this to glorify God?’ Because if I’m not using this in a positive sense, then what’s the point? If God is the reason I’m alive, what’s the point of doing something that’s not for Him?”

Chincoya cites a favorite passage from the Gospel of John (6:66-68), in which Jesus explains to a crowd of his disciples what it takes to follow him. “Most of them turn around and say, ‘How can we follow something like this,’” he said. “Then Jesus turns to the twelve and asks, ‘You do not want to leave too, do you?’ Peter’s response is then, ‘Lord, to whom shall we go? You have the words of eternal life. We have come to believe and to know that you are the Holy One of God.’ In the same fashion, I think my parents have dedicated their lives to serving God because of the same answer, ‘Where else would we go?’ Because he’s our Savior, and because I’ve seen my life as being shaped by God and my parents, where else would I go?”

Although Chincoya has played in a jazz ensemble before audiences at such venues as the Heritage Center at the University of Dubuque, it has been his worship leadership in the campus ministry there—as well as having provided music for the PC(USA)’s last two Big Tent events—that have proven most transformational. 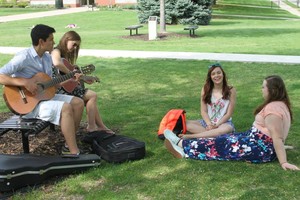 “I think that when you’re playing music that is not worship for God, there is an expectation of perfection in order to connect with people who tend to be more literate in music,” he said. “When it’s for worship, it doesn’t matter when I mess up or play the wrong chord. I think worship is an environment where people understand that it’s not for us, but for someone greater.”

While Chincoya has amassed a long list of accolades and achievements throughout his nearly four years at the University of Dubuque—including having been elected both Student Government Association president and president of the Christian Leadership Council—he at one time wondered whether he could even afford to attend college.

And then the connectional church stepped in.

Members and staff of Denver Presbytery—including the Rev. Tom Sheffield, the Rev. Amy Mendez, Raquel Yslas, and the Rev. Joe Mares, Chincoya’s pastor at First Presbyterian Church of Aurora, Colorado—connected him and his family to scholarships available through the Presbyterian Mission Agency’s office for Financial Aid.

“We looked for scholarships that would help anybody, without necessarily needing a Social Security number,” said Chincoya. “They all helped my family, including my uncle, who is trying to become an ordained pastor through the University of Dubuque using their distance program, while working a full-time construction job and being an assistant pastor at the Aurora church. It’s been a lot to manage, and there were days when he didn’t sleep, but he has been a great influence on me. I know I can do it because I have a great example of someone who has done much more.”

Mendez, who serves as pastor for Church Development and Multiracial Ministries for the Presbytery of Denver, has known Chincoya—whom she calls “a blessing in my life and ministry”—since he was 10 years old. She has had the privilege to watch him grow and mature as a young adult.

“Caleb is a true dreamer,” Mendez said. “Despite all the challenges his family has confronted in the U.S., Caleb has been able to make the right choices in his young life. For instance, his dream to go to college. His mother did not know how was she going to pay for his college tuition, but his academic discipline, determination and his hard work has enabled him to actively pursue higher education. In the local church and in the Presbytery of Denver, we feel very proud to have supported and invested in Caleb’s dream to complete his undergraduate degree. We are all excited for Caleb’s graduation next year and look forward to celebrating with him.”

One of the national scholarships for which Chincoya applied—and subsequently received—was a Student Opportunity Scholarship from the PC(USA). The Student Opportunity Scholarship serves PC(USA) college students by providing need-based aid for sophomores, juniors and seniors who are full-time, first degree students attending accredited institutions in the U.S. Students are awarded up to $2,000 for no more than three years.

He was also one of two seniors awarded a $1,500 supplemental award for service. In addition to his elected campus office, Chincoya has served as a Young Adult Advisory Delegate at the PC(USA) General Assembly, a camp counselor at Highlands [Presbyterian] Camp and Retreat Center in Allenspark, Colo., and last summer was a youth pastor intern at his home church in Aurora.

“Without people like Amy, Raquel, Joe and Tom, I wouldn’t necessarily be where I am right now,” said Chincoya. “The connections in our church come a lot through the actual people. They show a lot of love for what God is calling them to do, which is to share opportunities with others.”

Even though he will graduate in the spring of 2016, Chincoya has already started work on his M.Div. degree through the University of Dubuque’s 3/3 Program, which allows students to complete the B.A. and the M.Div. degrees in six years.

“I think the assumption is that everyone who enters seminary will become a pastor, but I think that seminary is the place where we go to understand God more in depth,” he said. “If I’m going to show others what God is about and they ask questions, I need to provide actual sources, biblical citations, and know the history of how these things happened. Going to seminary is an important part of continuing to grow my faith and share it with others.”

The next open application periods for scholarships are November 1, 2015 [2015-2016 Samuel Robinson Award, open to Presbyterian-related college juniors and seniors; and 2016-2017 National Presbyterian College Scholarship, open to rising first year students] and April 1, 2016 [2016-2017 Student Opportunity Scholarship, open to sophomores, juniors, and seniors attending an accredited college in the U.S.]. Visit the Financial Aid for Service website for updates and information.