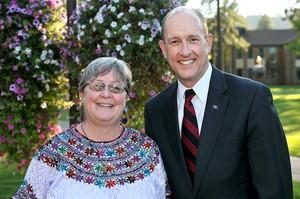 Vogel, who serves as a facilitator for the Intercultural Encounters Program of the Protestant Center for Pastoral Studies in Central America (CEDEPCA), earned her undergraduate degree in sociology at Whitworth in 1979. She is the daughter of Presbyterian missionaries who served on the Navajo reservation in northeastern Arizona, under the former Board of National Missions of the United Presbyterian Church in the U.S.A.

“I particularly love learning about and introducing groups to the work CEDEPCA does in transformative education with women and men all over Guatemala, addressing the root causes of poverty and cultures of violence with an understanding that women and children are the large majority of ‘the poor’ and of those targeted by violence,” Vogel says. “I also value how U.S. Presbyterians are working with our global partners to address these concerns, grounded in our common faith in Jesus Christ.”

The Alumni Mind and Heart Award, presented October 3 during a homecoming weekend reunion reception, is given annually to a graduate who has lived Whitworth University’s mission to “honor God, follow Christ and serve humanity” through a life of Christian service; and who has expressed loyalty to and connection with the university.

As a student at Whitworth College (now university), Vogel participated in an extended study and service experience in Central America that changed her life.

“Sometimes,” she says, “I think they should put a label on trips like these that says, ‘Warning: Participation in this experience could change the direction of your life permanently.’ However, I do not regret those changes.” 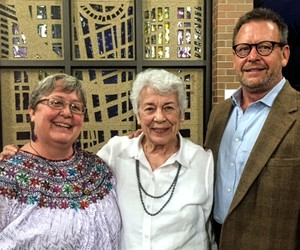 While in Central America, Vogel encountered courageous people facing life-threatening and life-altering situations. This led her to study at San Francisco Theological Seminary and to work with Central American refugees in the San Francisco Bay Area. She served in El Salvador from 1985 to 1993, where she assisted in writing a Self-Development of People grant to obtain PC(USA) funding for an adult literacy program in which high school students taught adults to read and write. Years later Vogel returned to El Salvador and had an opportunity to reconnect with one of the adult literacy students, Doña Lidia, who was at that time confidently leading a community Bible study.

In her ministry with CEDEPCA, Vogel hosts groups from U.S. congregations, presbyteries, universities and theological seminaries that are themselves seeking to engage in the kinds of transformational immersion experiences that changed her own life years ago. Her call to serve as a bridge between people and cultures, especially Latin American women on a grassroots level, has challenged and nurtured her soul, she says.

Vogel is a teaching elder of the Presbytery of the Grand Canyon and is affiliated with Palo Cristi Presbyterian Church in Paradise Valley, Ariz. When asked about her greatest accomplishments, she lists her daughter and son, Luz Rebeca and Amando Argueta-Vogel, among them. “They are two healthy, thoughtful young adults,” Vogel says, “They care about other people in the world. I am very proud of them.”

To learn more about Vogel’s ministry in Guatemala, watch a short video or read her ministry letters.