National day of remembrance ‘should be the story of all’

Churches honor veterans and their families on November 11 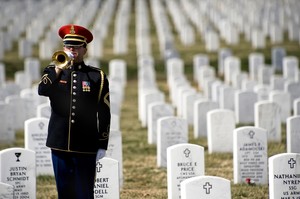 When the men’s chorus of Guilford Park Presbyterian Church in Greensboro, N.C., decided several years ago to send complimentary copies of its CD, Singing Our Faith, to the Presbyterians Caring for Chaplains and Military Personnel (PCCMP) offices in Washington, D.C., to distribute to active duty military chaplains, it was an outreach straight from the heart.

“Our music is mostly old hymns of the church, which we learned in our childhood,” says chorus member George Setzer. “We were thrilled to envision our faith music being shared with our troops around the world.”

Chorus leader Harold Shelton, a military veteran and church elder, had suggested the gift. The chorus followed up a year later by sending their Christmas CD to the chaplains. “We received many positive testimonials about the use of the CD with the troops in vespers services and other ways,” Setzer says. “All of the feedback we received expressed gratitude for the music and for our promises to support our forces with prayers from our congregation.”

Whether at Christmas or on Independence Day—or today, on Veterans Day— military chaplains, veterans, active duty soldiers, and their family members regularly express their appreciation at having their service acknowledged by their communities of faith.

“Since I am a veteran, I take pleasure in being remembered in worship,” says Setzer. “A special service I recall was during my wife's family reunion in New Washington, Ind., at Trinity United Presbyterian Church on July 4, when the bulletin and worship service acknowledged veterans’ service to our country. God and country are tied together for me in many ways.”

As a further show of support for military families and personnel, Guilford Park’s Congregational Care Committee added military care as a new ministry for the committee in 2013. Care packages and cards are sent periodically to those connected with the congregation who serve in the military or in a military-related position.

“I believe the best way we honor our veterans is by providing for their physical, emotional and spiritual needs when they return home from war,” says the Rev. Dr. Jeff Paschal, pastor of Guilford Park, “and by demanding that our elected representatives send our military personnel into battle only as a last resort, and only when there are clearly defined objectives that outweigh the tragedy of war.”

The Rev. Donald R. Wilson, associate director for the PCCMP—the training and endorsement arm for all Presbyterian government chaplains—stresses that Veterans Day “really needs to focus on our past heroes who have served, especially our Vietnam and Korean Conflict vets.”

“I’ve seen about a half dozen stories on TV this morning about vets, and they have all focused on two groups, our wonderful World War II vets and our current injured and recovering vets,” Wilson says. “Awesome stories, but as a nation I grieve that we still are overlooking our Cold War veterans.”

Wilson, a veteran himself, says that as he sits back and watches the nation honor the veterans’ sacrifice, he finds that there is a tendency to overlook the families.

“I know most churches I’ve attended in the past several years are always asking those who have served to stand,” he says. “I wish they would ask the spouses, children, and parents, and then all of those who supported the military veteran to also stand. Granted most everyone might end up standing, but that is the reality. This is a celebration of all who served and sacrificed. This is a national day of remembrance of the sacrifice all of us have made, and it should be the story of all.”

In Wilson’s experience, the church has been extremely supportive. “As for me, I am extremely touched by churches’ willingness to remember,” he says. “For those who suffer from PTSD or moral injuries, the church can help by creating a safe zone for them and assist them to find reconciliation with these wounds by continuing to be open and listen without judgment.  Honestly the church must always be an advocate for peace, but the church must be a refuge of grace for the Solider, Sailor, Marine, Airman, and Coast Guardsman at the same time.”