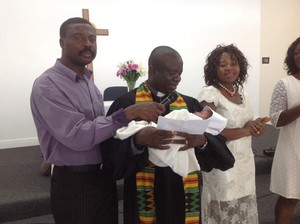 Westminster Presbyterian Church in Houston had a problem. When they established their congregation in 1981 their neighborhood, was predominately Caucasian. But as the neighborhood began to change, the church stayed the same.

“Most of the members had been there 30 years,” says the church’s treasurer, Forbes Baker. “They’d grown up together with their children.”

As the neighborhood diversified and the population approached 90 percent persons of Hispanic, African and Asian descent, church membership continued to dwindle. Only a few lived near where they worshipped, the others were commuting to the church. Worship attendance was down to 24. The church knew it had to do something. At Big Tent in Louisville in 2013, they discovered New Beginnings at a Presbyterian Mission Agency workshop.

Westminster went through the discipleship-based program the following year. The discernment and assessment process, which helps presbyteries and congregations envision a new future, brought clarity to the church.

“Their transitional pastor, John Hirling told me that the congregation began to see themselves ‘as a beloved relative who had been in declining health for years,’” says Presbytery of New Covenant’s Mary Marcotte. “[They] were coming to rejoice in a life well lived.’”

After going through New Beginnings, the congregation recognized they could no longer afford to be in their physical building, which they sold to a Spanish Pentecostal congregation, for $50,000 above the listing price. They invested what they had left, $400,000, then rented a storefront, two blocks away from the original church.

“We wanted to see how long we could go, before we started eating into the reserves,” says Baker. “It quickly became apparent that a white, Protestant church in our neighborhood wasn’t going to survive—we were burning through $10,000 a month.”

As the church got down to $350,000 in reserve funds, the majority agreed to “shut it down.” Baker remembers one woman in her 70’s saying, “I’d love to be the change that needs to happen for our ministry to continue, but I don’t have the energy to accomplish it.” 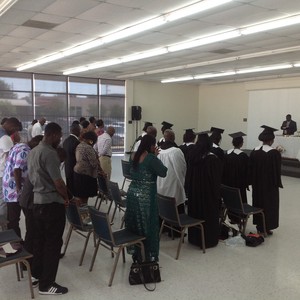 At that same time Presbyterian Church of the Redeemer was looking for a building in Westminster’s neighborhood. Most of the people in the Ghanaian worshiping community lived in the area. With the Presbytery’s help, Westminster decided to reassign their lease, which runs through January of 2017, to the Ghanaians.

“We gave them most of our earthly goods,” says Baker. “Our communion table, desks, computers and chairs.”

Westminster also gave what was left in their trust fund, to the Presbytery. Half of the $350,000 will help new worshiping communities or struggling congregations. The other half will fund the neighborhood food pantry mission they started, for scholarships for Presbyterian children to go to camp or youth ministry events like Triennium, and to college students for graduate or undergraduate degrees. The reassigned lease, which has 14 months remaining, will be paid for by the Presbytery and gifted funds from Westminster.

Redeemer’s pastor Ebenezer Boateng is excited about being able to worship in the storefront, because “so many immigrants and Ghanaians live there.” Their first service in their new space was on October 4. Already five new people have come from the neighborhood.

“We worshiped with them at their final service, and I felt the emotion, I was not all that excited on that day,” he says. “I could see how hard they had worked, and yet it was coming to an end for them.”

It was an emotional time for those who worshipped together at Westminster for the final time, especially as they listened to the nine-member choir that included a percussionist, a pianist, and stringed instruments.

“Several women had a good cry together,” says Baker. “It was painful, and joyful at the same time. All of us were uplifted seeing the Ghanaian children running in the church again. There were over 125 people there.”

When Boateng met people from Westminster for the first time, he sensed how important it was for the two communities of faith to make this connection. “They opened their hearts to us, it’s like we’d known each other a long time,” he says. “God works in mysterious ways. We want to, and will do our best, to make sure their work wasn’t in vain.”

Baker agrees that the relationships developed with the Ghanaians, and the knowledge they would have the opportunity to grow the church in the neighborhood, were very important.

“Those of us who understood this was a blessing of God, knew we couldn’t squirrel it away by sitting there, dripping money to stay together until we died off,” he says. “We talked with the minority [those who opposed the closing] about that, otherwise we’d be saying we’re just a social club. It is very satisfying to know ministry will continue here.”