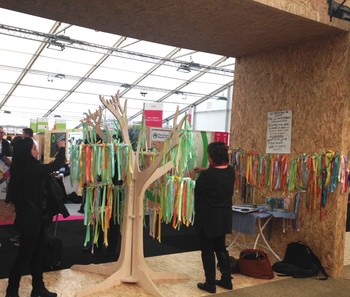 Participants write the place of the earth they love—and would hate to lose to climate change—on ribbons to hang on this Climate Ribbon Project tree. —Rebecca Barnes

Two Presbyterian Church (U.S.A.) staff members, Rebecca Barnes, associate for Environmental Ministries and Bill Somplatsky-Jarman, coordinator for Mission Responsibility Through Investment with the Compassion, Peace & Justice Program, recently returned from the 21st Conference of the Parties (COP 21) conference in Paris. The duo had joined world leaders, government officials, activists, business leaders and other faith-based representatives from nearly 200 countries at the conference to discuss the impact of climate change and possible solutions to avert climate disaster.

After two weeks of intense negotiations and meetings, an agreement was reached. The main goal of the conference was to develop a response to man-made greenhouse gas emissions, which according to participants is responsible for increasing the Earth’s temperature, or global warming. Each of the participating countries submitted a proposal for reducing their emissions. The proposals, called “intended nationally determined contributions” (INDCs), are a prospective roadmap for each country to follow. The United States’ INDC, for example, is to cut economy-wide emissions of greenhouse gasses by 26 to 28 percent below its 2005 level by 2025.

The target maximum global temperature rise is set at 2 degrees Celsius, or below. The final text agreement, however, also establishes for the first time a target temperature of 1.5 degrees Celsius in order to protect island nations who are threatened by a rise in sea levels. Additional key elements of the historic agreement include:

The agreement will be open for signing by each participating country on Earth Day next April 22 in New York. Once 55 countries, approximately 30 percent, ratify the text the agreement will enter into force. 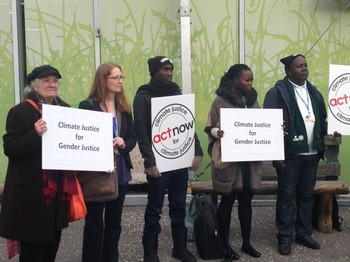 Barnes, who is also coordinator for the PC(USA) Earth Care Congregation program, wrote about her COP 21 experiences on the Eco Journey blog page.

“COP 21 was a success in its basic accomplishment of having a global goal of moving towards a low carbon future and agreeing together that the way we develop and use energy must change,” says Barnes. “We’ve never had a full global agreement like this, with nearly 200 parties at the table. Even if not all the pieces are what we hoped for, participating countries still have an agreement that states we’re working together to limit carbon.”

Despite nearly universal optimism about the Paris agreement, there are reasons to be wary that some of the participating countries can actually reach its emission goals. In the agreement, large developing countries like India and China demanded their responsibilities be distinguished from developed countries for fear the agreement might require them to take actions that would slow their economic growth. In emerging markets, coal means providing electricity for a growing economy and cheap access to energy.  According to the Climate Action Tracker there are plans to build more than 2,400 coal-fired power plants around the world over the next 15 years in countries such as India, China, Japan, South Africa, South Korea and Turkey. If all those coal plants are built by 2030, emissions from coal power would be 400 percent higher than what’s needed to hold warming below 2 degrees Celsius.

“The real work begins now,” acknowledges Barnes. “Each country must strive to be its best self and actually meet its voluntary commitment. Businesses and private sector have to work to develop renewable energy and low carbon solutions. Faith communities, non-profits and individuals also need to be empowered. The agreement won’t mean much if we don’t actually make the personal and national goals that result in substantive change.”