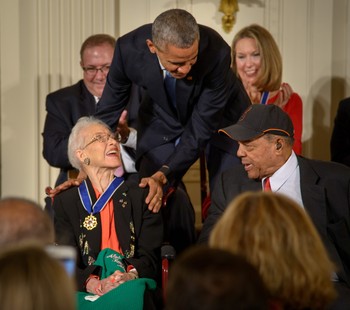 Katherine G. Johnson, a PC(USA) member and career NASA scientist, was one of 17 Americans honored November 24 with the Presidential Medal of Freedom. Johnson, a member of Carver Memorial Presbyterian Church in Newport News, Va., for more than 50 years, has served the church in several leadership roles including, not surprisingly given her gift with numbers, its finance chair.

A release from the White House called Johnson “a pioneer in American space history” and noted the award “is the Nation’s highest civilian honor, presented to individuals who have made especially meritorious contributions to the security or national interests of the United States, to world peace, or to cultural or other significant public or private endeavors.”

A NASA mathematician and aerospace technologist from 1953–1986, Johnson's computations have influenced every major space program from the Mercury launches through the space shuttle program. Johnson was hired as a research mathematician at the Langley Research Center with the National Advisory Committee for Aeronautics, the agency that preceded NASA, after they opened hiring to African Americans and women.

Johnson exhibited exceptional technical leadership and is known especially for her calculations of the 1961 trajectory for Alan Shepard’s flight as the first American in space and for her 1962 verification of the first flight calculation made by an electronic computer, in this case for John Glenn, the first American to orbit the earth. She is also famed for her trajectory calculations of the 1969 Apollo 11 mission, the first human voyage to the moon. In her later NASA career, Johnson worked on the Space Shuttle program and the Earth Resources Satellite and encouraged students to pursue careers in science and technology fields.

“Katherine Johnson once remarked that even though she grew up in the height of segregation, she didn’t think much about it because [she said], ‘I didn’t have time for that… don’t have a feeling of inferiority. Never had. I’m as good as anybody, but no better,’” said NASA Administrator Charles Bolden. “The truth in fact, is that Katherine is indeed better. She’s one of the greatest minds ever to grace our agency or our country, and because of the trail she blazed, young Americans like my granddaughters can pursue their own dreams without a feeling of inferiority.” 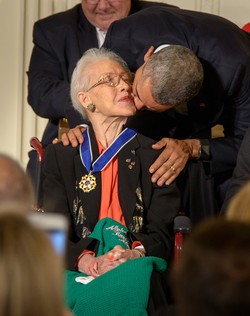 The recipient of many awards and honors throughout her career, she taught math in West Virginia and Virginia prior to joining NASA. Born in 1918 and a gifted student from an early age, she completed high school at age 14, earned a bachelor’s degree in mathematics and French by age 18, and continued her education by pursing graduate studies in mathematics at West Virginia University. Married to Lt. Colonel James A. Johnson (ret.) since 1959, she had three daughters with a belated husband, James Goble, who died of an inoperable brain tumor in 1956.

Johnson’s former pastor at Carver Memorial, the Rev. Dr. Brian Blount, now Union Presbyterian Seminary's president and professor of New Testament, called Johnson “A true space heroine, but one of the people you rarely hear about.”

Blount spoke of Johnson’s humility, saying he had been the pastor at Carver Memorial for three years before he ever heard about her early work in a select pool of African-American women mathematicians, initially called “computers,” charged with collecting flight data and verifying that NASA’s newly introduced electronic computers had correctly calculated the details of space missions.

“She's been a wonderful Presbyterian, [and she] served in all kinds of capacities at the church when I was there,” added Blount.