Gradye Parsons adds voice to those seeking to ‘choose welcome’ 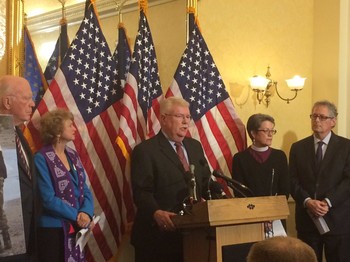 In the wake of the tragic attacks in Paris and more recently in San Bernardino, Calif., many have been quick to point fingers and place blame on refugee families fleeing horrific violence in Syria and other countries. In reaction to the ugly, xenophobic rhetoric heard on the campaign trail and attempts in Congress to restrict the resettlement of refugees in the U.S., a coalition of national faith leaders from across the religious spectrum joined Senators Leahy (D-VT), Durbin (D-IL) and Kaine (D-VA) to call for an end to incendiary and divisive remarks.

At the press conference this morning, the group responded to the latest attempts to vilify refugees and called on lawmakers to engage in smart, moral policy making over reactionary fear mongering.

“Intolerance has no place in our country," said U.S. Senator Patrick Leahy (D-VT). "Accepting refugees is a part of our history, our culture, of who we are, and it can be done safely with the proper screening procedures. In the words of Pope Francis, our message to those seeking refugee should be ‘one of hope and healing, of peace and justice.’ To respond by closing our doors to those fleeing our enemy is to give in to that enemy. It is in these difficult moments that our actions most directly reflect who we are as a nation. It is time for Senators to lead by following our consciences. It is time to do what is right and moral.”

U.S. Senator Dick Durbin (D-IL), added “Some have reacted to these horrific terrorist attacks by calling for our government to suspend refugees coming to this country. Make no mistake: that is precisely what terrorists want. They commit these atrocities to disrupt our lives, make us look over our shoulders, and to turn neighbor against neighbor in fear. We cannot allow the United States to fall into that trap. America has a proud history of responding to tragedy with compassion for the victims, and steady resolve to prevent future attacks. Let me be clear: America’s response to these attacks should be to take the fight to ISIL abroad and to strengthen our national security at home. Our response should not be to slam the door on the children and families fleeing ISIL terrorism themselves.”

"As the Book of Job tells us, challenges in life are a test of whether we will be true to our principles, or whether we’ll abandon them in the face of adversity," Senator Kaine (D-VA) said. "In the debate over refugees, we cannot abandon the core principles that we stand for as a nation. Refugees are not our enemies. ISIL is our enemy. Instead of labeling innocent women and orphans as ‘foreign enemies’ and making it harder for them to seek refuge in our country, Congress should finally declare war on our true enemy by passing an authorization of force against ISIL.”

The Rev. Gradye Parsons, Stated Clerk of the Presbyterian Church (U.S.A.) General Assembly, said, “The Presbyterian Church believes that as a country we cannot give in to fear. In recent months, we saw the tragic images of children and their parents with nothing but the clothes on their backs fleeing war, terrorism and persecution in their home country. We must stand with them, both to honor our moral obligation to those fleeing persecution, and as part of our foreign policy, in an effort to encourage other countries to open their doors to refugees. Therefore we are asking everyone to choose welcome. Welcome to the fleeing refugees who seek our protection, our understanding and our love.”

Cardinal Theodore McCarrick, Archdiocese of Washington added, “The United States has the most secure refugee resettlement process in the world. Refugees are the most scrutinized and screened individuals to enter the United States.There is absolutely no reason to stop or pause the resettlement of Syrian refugees. The fear around this is wrong and as people of faith, we must demand more from our public officials”

“Many families find themselves between the violence behind them and the refusal of resettlement in some place with peace and safety, which is all that they really want,” said Bishop Sally Dyck, Northern Illinois Conference of the United Methodist Church. Going on to share stories of the United Methodist Church’s efforts to work with refugee families as they resettle into their new communities, she continued, "I trust that all of our elected leaders will not prevent these Syrian families from being able to resettle in our country.”

The Rev. Richard Graham, Bishop, Metropolitan DC Synod, Evangelical Lutheran Church in America added, "During World War II, Lutherans were instrumental in welcoming immigrants into the United States and at this pivotal time in history, we continue to welcome refugees of all faiths and cultures. By doing do, we embody the values that we as people of faith hold dearly: welcoming the stranger, loving our neighbor and standing with the vulnerable."

Sultan Muhammed, Representative of The Nation’s Mosque said, “Islam is a religion of peace. Sadly, due to the actions of a few, it has been associated in the media with the violence seen from extremist groups that have no foundation or place in Islam. We must welcome refugees as survivors of this violence and offer them the same safety and welcome that the United States has so proudly offered generations of immigrants and refugees before them.”

The Rev. Dr. Sharon Stanley-Rea, Director, Refugee and Immigration Ministries, Disciples of Christ, “As communities of faith, we are accustomed to a heritage where the dramas of people’s pain plays out on a precipice. In the Abrahamic traditions, we think of Moses struggling with discrimination before Pharaoh. In the Christian faith, Jesus and his own family, fleeing to seek safety so shortly after his birth amid threats of death. Now, in this time of unprecedented numbers of refugees around the world, we find ourselves together on a new moment of a precipice as Congress is considering legislation that could include policy riders that would grind to a halt our offering of resettlement to the suffering and safety-seeking Syrians and Iraqi refugees. During this time, we are grateful that we have felt unprecedented responses from faith communities all around the world, who are saying they are ready to build hospitality highways of welcome for refugees. It is of great comfort in these days of challenge to have partners of faith and leaders of this great country who are with us on this precipice of decisions happening.”