PC(USA) mourns the death of friend and partner-in-ministry Kayla Mueller, an American aid worker held hostage by the Islamic State. 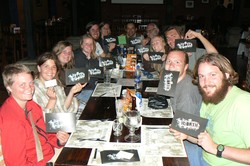 Mueller and her campus ministry colleagues dine in Guatemala, 2009. Mueller is second from left. —Gregory Allen-Pickett

Since the confirmation of her death earlier this month, the words and life of kidnapped American aid worker and peacemaker Kayla Mueller, 26, have blanketed social media and the pages of every news outlet. Amid outrage and grief, her words have struck a chord in a world where this kind of violence is dangerously nearing normalcy. “For as long as I live, I will not let this suffering be normal, something we just accept,” Mueller said in 2013, describing her work with Syrian refugees.

“I find God,” she later said to her family, “in the suffering eyes reflected in mine. If this is how you [God] are revealed to me, this is how I will forever seek you.” That expression of faith is no surprise to Mueller’s friends and partners in the Presbyterian Church (U.S.A.), who knew her to be a devout, passionate and caring young woman.

Gregory Allen-Pickett, general manager of Presbyterian World Mission, first connected with the young activist in May 2009; it was a meeting that left an indelible impression on him.

“I was working in Guatemala with a faith-based, nonprofit called Healing Waters. We worked with local communities to establish a source of safe drinking water, and Kayla’s campus ministry group was there at the same time. We interacted over dinner and toured the water project,” recalls Allen-Pickett.

“Kayla stood out to me as particularly thoughtful and articulate. She was processing the poverty she had been exposed to and the systemic issues related to it. Her questions and comments showed a deeper level of commitment and thought regarding the issues that surrounded her on the trip. It was impressive for someone of that age.”

Allen-Pickett blogged about his experience in Guatemala with Healing Waters and his encounter with Mueller and the rest of her colleagues with United Christian Ministries at Northern Arizona University, an ecumenical campus ministry group with strong PC(USA) ties. You can view the blog postings, including photos of Mueller, here and here. 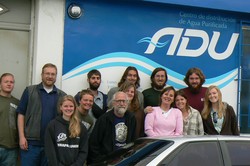 By this time, the young, soon-to-be political science graduate (she received her bachelor’s degree in just two and a half years) had carved out a lengthy resume of activism and humanitarianism.

She began her efforts in middle school, volunteering for local Kiwanis Club events and homeless shelters. While still in high school she organized a protest to raise awareness about the genocide in Darfur, Sudan. And as a senior in high school she received the 2007 Gold Presidential Volunteer Service Award for her work with Americorps and Big Brothers Big Sisters, among many other groups.

Although Mueller was regularly recognized for her work, Kathleen Day, her minister, long-time friend, and director of United Christian Ministries, is quick to point out that she was not a “resume-builder.”

“Whenever someone needed help Kayla was happy to join in and didn’t need to be the center of attention. Sometimes she organized things, but that wasn’t necessarily her focus; the majority of what she did isn’t on her resume,” says Day. “She was just a humble, down-to-earth girl who liked to ease the suffering of just one person. Small, seemingly insignificant gestures of compassion did not escape her.”

As with most young adults, Mueller expanded her horizons during her college years. She studied political science, international affairs, and world religions, and traveled to Israel, India and the Palestinian territories on volunteer missions. In Palestine she sat in people’s homes to keep them from being demolished and saw crushing violence that solidified her human rights stance. It was a conviction that would eventually compel her to travel to Syria in a few years.

Despite her travels, Mueller’s heart stayed true to her local roots. She came back to Arizona in 2011 to work at an HIV/AIDS clinic. She also came to tell the stories of what she had seen abroad.

“Kayla came back to the campus ministry and presented her experiences in Israel and Palestine,” Day recalls. “She wanted to tell the world about what was really going on and encourage others to go and see for themselves.”

In December 2012 Mueller traveled to the Turkey-Syria border to provide aid to Syrian refugees through the Danish Refugee Council. She was passionate about helping the refugees and raising awareness about the crisis that was unfolding before her.   “Anger, sadness, and fear,” she wrote in her blog at the time, “are the best composts for compassion.”

That anger, sadness and fear, however, began to take their toll. Day recalls that during Skype sessions with students Mueller became increasingly disillusioned and desperate over the refugee situation, and Day’s students could hear the pain in Mueller’s voice. To help ease that pain, the students collected $500 in May, 2013 for Mueller to hand out to the refugees as she saw fit.

Help also came from the very people Mueller was there to aid. “Kayla learned spiritual customs from Syrians who cared about justice and compassion and feeding the poor and the hungry,” says Day. “She found God particularly in the eyes of the suffering, and Syria was a place that needed great mercy and compassion.”

On Aug. 3, 2013, Mueller and a friend visited a Doctors Without Borders hospital in Aleppo, Syria, to repair the hospital’s Internet connection. She and her companion stayed there overnight and were reportedly taken captive the next day on their way to the bus station.

It was spring 2014 before anyone would “officially” hear from her again — in the form of a letter she sent out through fellow captors who had been released. The letter, shown in its entirety here, is a testament from someone who had found an ability to connect with God — and feel God’s presence — under circumstances that might normally make one reflect on the absence of God.

If you could say I have “suffered” at all throughout this whole experience it is only in knowing how much suffering I have put you all through; I will never ask you to forgive me as I do not deserve forgiveness. I remember mom always telling me that ... in the end the only one you really have is God. I have come to a place in experience where, in every sense of the word, I have surrendered myself to our creator [because] literally there was no else. By God [and] by your prayers I have felt tenderly cradled in freefall. I have been shown in darkness, light [and] have learned that even in prison, one can be free. I am grateful. I have come to see that there is good in every situation[;] sometimes we just have to look for it. I pray each day that if nothing else, you have felt a certain closeness [and] surrender to God as well [and] have formed a bond of love [and] support amongst one another.

On Feb. 10, 2015, Mueller’s family received information of her death directly from the terrorist group known as the Islamic State, a fact later confirmed by the U.S. State Department.

President Obama, in a released statement, said, “In how she lived her life, she epitomized all that is good in our world. She has been taken from us, but her legacy endures, inspiring all those who fight, each in their own way, for what is just and what is decent.”

Day wants her students to learn from Mueller’s legacy.

“I’m going to counsel my students that anyone can respond to suffering,” says Day. “It’s OK if you never feel called to leave your community.  You don’t have to travel the world; suffering is right before us everywhere, and we’re just called to see it — to respond to it and have an expression of joy, kindness and advocacy for those that don’t have a voice.  That’s what Kayla loved and practiced.”

“We’re not all called to go overseas and serve directly,” adds Allen-Pickett. “Each of us is called in our own way to make the world a better place and manifest the love of Christ to those around us. Kayla did that in a very profound and tangible way, and my hope is that she inspires others to alleviate suffering in the world and in their own communities.”

Mueller’s parents are starting a foundation called Kayla’s Hands. Her campus ministry will be exploring the issues in Syria, such as refugee justice, that touched Mueller so deeply. It will hold fundraising events in which proceeds will go directly to Kayla’s Hands. And now, thanks to Mueller, perhaps more lives will be made visible.

To read what Mueller’s friends have to say about her, visit forkayla.org.