People who are seeking peace

Multifaith group builds community in the unlikeliest of spaces

A rabbi, an imam, and a priest walk into a college. It sounds like the beginning of a joke, but in Dubuque, Iowa, it is the gathering of a group called Children of Abraham.

This multifaith gathering grew out of interreligious friendships among educators, theologians, and colleagues. John Eby (a Christian professor of History, Loras College), Alan Garfield (a Jewish professor of Computer Graphics at the University of Dubuque), Adib Kassas (a Muslim psychiatrist at Mercy Hospital), John Waldmeir (a Catholic professor of Religion at Loras College), and Bonnie Sue Lewis (a Presbyterian Christian professor of Mission at the University of Dubuque Theological Seminary), were inspired to “have conversation—Muslim, Jewish, Christian conversation—open to the community where we talk about our faith,” according to Lewis.

When she first met Kassas, Lewis was teaching a class for pastors at the seminary about Christianity and Islam. “IBM had moved to town, and with it came a diverse population,” says Lewis. “We wanted to build relationships with our new neighbors.”

After being invited to give a lecture, Kassas made himself available to Lewis’s class every week. The discussions that followed were stimulating and engaging. They visited local mosques and homes of Muslim families. This was the beginning, as they say, of a beautiful friendship—one between Lewis, Kassas, Eby, and many others that grew over time to become the Children of Abraham. When the group first started meeting, it was just three to four times a year. Now they meet monthly with anywhere from 75 to 100 people in attendance.

They meet in sacred spaces—temples, churches, mosques—being intentional not to meet in neutral spaces because they believe the space is part of the education and the experience.

Recently they began asking themselves , “How can we as a community support one another in times of particular ceremonies, rituals, holidays—sacred gatherings? Are there ways we can offer hospitality to a community during these special times?” 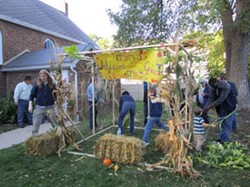 Thus it began. Together as a group, they helped a local Jewish group build a sukkah for Sukkot, the Feast of the Tabernacle. After the holiday, they came together to share food and festivities.

In November, the Children of Abraham participated in a Muharram festival prayer service with a local Muslim group. Everyone was invited to participate in both service and hospitality as they desired.

On March 11th, there will be a Lenten service at the Westminster Presbyterian Church in Dubuque. Together, Roman Catholics, Greek Orthodox, Christian, Muslim, and Jewish followers will gather to learn and understand the religious observation of Lent.

When asked what she would recommend to other communities who feel called to start a similar group, Lewis advised, “We’ve worked hard to build relationships, to love and trust one another. Find a core community that commits themselves to one another and surround each other with love.”

Sue Dravis, a ruling elder at Westminster Presbyterian and member of Children of Abraham, finds strength in the group. “I understand their faith experience better and how they live their lives. That makes me stronger as a Christian.”

In the spring of 2014, Dravis was a member of the planning team for the Mosaic of Peace Presbyterian Peacemaking Conference in Israel/Palestine. She, like several others, led a small group that met before, during, and after the trip to share experiences and learning.

Her interest in this historically rich and troubled region has enabled Dravis to find even more in common with the other Children of Abraham members. One of their meetings focused on the story of Joseph and the coat of many colors. They heard the story from the Bible, the Torah, and the Koran. “It brought the story to life for me, adding new dimensions.”

Lewis has been asked about her experiences with the Children of Abraham many times. People always want to know if she is acting as a missionary. “Do I want them to know Jesus? Of course! But I am not there to proselytize. I am there to bear witness to the love of God. I am free to speak about Jesus and they are free to speak about Muhammad.”

Dubuque is a city of approximately 60,000 people. Building relationships has been the core of Children of Abraham’s success. “This is what Jesus asks us to do. I feel blessed to be able to walk in this place with these brothers and sisters that I care deeply about,” said Lewis. “God has brought together what I would call ‘people who are seeking peace’.”

The cross-cultural hospitality, the ecumenical and interfaith respect, and the diverse interaction make this group something unique.

“It is all about building relationships. The first one is with God, next is with your brothers and sisters and the body of Christ,” says Lewis. “If we are not loving one another regardless of difference, we are not living as Christ would have us live.”