For many migrants, the lure of a better life means risking countless perils. 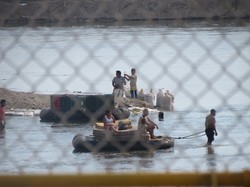 Activity on the Usumacinta River, as Voices from the Border and Beyond cross the Mexico border into Guatemala. —Paul Seebeck

In the Central American countries of Guatemala and El Salvador we — a group of 15 Presbyterians traveling on the Voices from the Border and Beyond seminar — are reminded of a profound truth: that one of the worst things that can happen to us as human beings is “to turn people into merchandise.”

And yet human trafficking — selling people as sex or labor slaves — is part of the reality migrants face, along with extortion, as they seek to make a better economic life for their families.

“The drug cartels make it even more dangerous,” Ursula Roldán of Rafael Landívar University in Guatemala City tells us at the Protestant Center for Pastoral Studies in Central America, a mission partner of the Presbyterian Church (U.S.A.).

“Add to that interest from certain companies who profit from detaining people at the border. They don’t want immigration reform,” she says, citing companies that build or operate detention centers. “We believe there are 500 lobbyists working the U.S. Congress to make sure reform doesn’t happen. It all becomes very complicated.”

Even some unscrupulous attorneys get in on the act, knowingly taking migrant cases that will fail, she adds. They extort families of loved ones in both countries for $5,000 — giving them empty promises and hope before their loved ones are deported back home.

The complexity of the situation is compounded by still other economic factors. For example, 11 percent of Guatemala’s gross national product is money sent home by Guatemalan immigrants in the U.S. In El Salvador it is a jaw-dropping 17 percent.

This dynamic has huge implications for both countries. It also creates inflated expectations, particularly for returning youth. In El Salvador they balk at decent Salvadoran jobs offered them. According to Doris Rivas of El Salvador’s National Council for the Protection and Development of Migrants and Their Families, the youth often say, “You expect me to work for a month for what I earned in the U.S. in two to three days?”

These complications have a profound impact on Guatemalan and Salvadoran lives — for those who stay and for those who risk everything crossing the border to get to the U.S.

Drama in real life and on the stage

In Quetzaltenango, the second-largest city in Guatemala, the real-life dramas have been replicated onstage by a group called the Faith Stories Project. 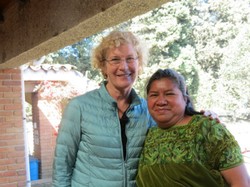 Linda Valentine with Juana Herlinda after her performance in a play based on her husband’s migration to the U.S. —Paul Seebeck

The Faith Stories Project was started by a PC(USA) Young Adult Volunteer in Guatemala, Jennifer Thalman Kepler, who connected this all-women project to a theater group she cofounded, Looking for Lilith. The members of Looking for Lilith write and produce original plays based on women’s experiences.

One play recounts the story of a family where, after the husband loses his job, his mother’s family urges him to migrate while his wife and three-year-old son beg him not to.

After trying four times, the husband finally gets into the U.S., where he finds work and sends money back to his family for three years. Then, on his son’s sixth birthday, he calls, demanding that his wife join him and leave their son behind with a grandmother. If his wife refuses, the man says, he will abandon them.

Refusing to leave her son behind, she becomes a single mother, trying to keep him in school. Increasingly angry, he tells her he won’t return to school until his father returns. When he is 17, the son falls into the hands of drug traffickers, who give him new shoes and fine clothes.

Most young people who receive these kinds of gifts end up disappearing if they refuse to move drugs — or try to get out. But this young man breaks free when the traffickers are arrested. 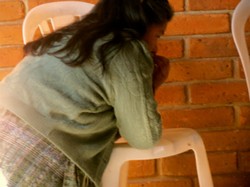 In this scene, Juana Herlinda prays for her son after he falls into the hands of drug traffickers. —Paul Seebeck

“This is a miracle story,” says one of the Guatemalan fathers, Werner, who is watching the play with us. “By the grace of God the police caught them before the traffickers followed through on threats [that] they would kill him.”

For Juana Herlinda, the play has special meaning: her family is the subject of the play. Her son is now 22, a leader in his church’s young adult group. “I wish I could’ve changed my husband’s decision,” she says. “It was very hard on my son. He told me he wouldn’t study again until his father returned. He still holds him in his heart.”

“It’s a drama, but nevertheless it make me cry, knowing it is true, knowing this happens so often,” says Guatemalan church leader Juana Maria Pérez. “I’m really worried about the children today; they’re the ones who suffer. As Christians, there’s a lot of work to be done.”

“We enjoy being together as we put together scenes about the reality of our lives,” says Marina de Monterroso. “Maybe we can teach others as they see themselves in the drama.”

As these women find their voice, others are joining the project. Women from two churches in Virginia — First Presbyterian in Winchester and Fairfax Presbyterian (Thalman Kepler’s home church) — have provided support, and groups from their churches accompany the artists once a year to work on new material.

“My heart breaks hearing these women’s stories,” says Linda Valentine, executive director of the Presbyterian Mission Agency, who traveled with the Voices from the Border and Beyond seminar.

“There is more to be done to create a just and more equitable society in Guatemala and a more just and humane immigration system in the U.S.

“The U.S. has great influence on the former and responsibility for the latter. As Christians, we are indeed called to act and advocate for both.”

Editor’s note: Next, we’ll hear about the horrific ordeal of two Salvadoran women abducted by traffickers after they crossed into Mexico from Guatemala.