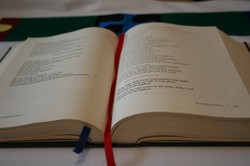 Harold Mayo Daniels was born in Walla Walla, Wash., April 10, 1927, to Ralph Lionel Daniels and Lillie Maude (Smith) Daniels. He received a Bachelor of Arts from Northwest Nazarene College (now University) in 1948, a Bachelor of Divinity from Nazarene Theological Seminary in Kansas City in 1951, and Master of the Science of Theology and Doctor of the Science of Theology degrees from San Francisco Theological Seminary in 1971 and 1976, respectively.

During that tenure, Harold was project director and editor of the “Book of Common Worship” (1993), acclaimed as a monumental work of ecumenical liturgical renewal. His passion for ecumenism informed his service through the Consultation on Common Texts, the Liturgical Conference, the National Council of Churches Commission on Worship and the Arts, and the Association for Reformed and Liturgical Worship. He was a longtime member of Societas Liturgica, the Presbyterian Association of Musicians, and the North American Academy of Liturgy, receiving the academy’s Berakah Award in 1995. A prolific author, Harold wrote two books, edited many others and continued to publish articles until his death.

Harold was married for 62 years to Josephine Marie Keller, with whom he had four children, four grandchildren, and one great-grandson. He enjoyed hiking the mountain trails of the Northwest, especially those in Glacier National Park, and was an avid photographer and winemaker.

“Harold was a dear friend, sage advisor, supportive colleague and faithful partner in ministry,” says David Gambrell, associate for worship with the Presbyterian Mission Agency. “I’m grateful for his careful stewardship of Christian tradition, his fierce commitment to ecumenical collaboration and above all his profound vision of Christ’s transforming presence through the liturgy. These things will be gifts for generations to come.”