Home News Dreaming of a church with no steeples, buildings

Dreaming of a church with no steeples, buildings

Pastor following vision wonders “Where will Farm Church end up?” 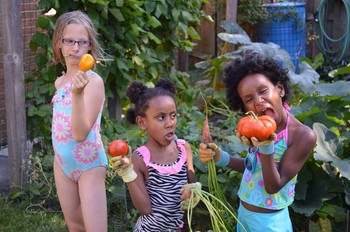 Ben Johnston-Krase’s children (left to right), Sylvia, age 11 Ezgihaye, age 6, Meheret, age 8 are excited about Farm Church, but they wonder where it will be and where they go to school this fall? —Ben Johnston-Krase

Pastor Ben Johnston-Krase wonders where the church he has been called to is going to be, where his 6-, 8-, and 11-year-old daughters will go to school.

The ministry he has been called to—the one that he left his pastorate at First Presbyterian Church in Racine, Wisconsin for—doesn’t really exist yet.

Except it does, in a dream and on a Facebook page, and in magazine and newspaper articles.

In that dream, Johnston-Krase saw himself being called to a new church, to be their pastor.

But when he got there, there weren’t any buildings. Nothing was there except a farm.

“It was a totally cool idea and feeling,” he says. “Immediately I wanted to worship there. It was a church I wanted to be a part of.”

Fully awake, he got out of bed and googled “farm church.”  Nobody was doing what he’d seen.

He went to GoDaddy and purchased a domain name for a Farm Church website that is now being developed.

The next morning, when he told his wife, Karla, about his dream, and the beginning of a vision of creating church on a farm around worship and the mission of growing and sharing food, she said, “That’s it.”

Then Johnston-Krase called two of his closest friends, Allen Brimer and Brandon Wert.

They were at seminary together at McCormick in early 2000, their wives and children part of the same dinner group. They had talked about what it would be like one day if they moved to one community to raise their children and to do ministry together.

When they heard Johnston-Krase’s vision, their reaction was similar to Karla’s, “We’re in,” they said. For Wert that meant in a couple of years as his wife Jodi had just accepted a job in Singapore in early childhood education.

For Brimer, who had worked on an organic farm for a couple of years before seminary, the vision spoke to his desire to somehow combine his passions of farming and parish ministry.

“I really get farms,” he says. “They make sense to me organizationally.”

Over the months ahead, as the pastors continued to talk and pray together, they began to realize each had gifts the others didn’t—that together, they might bring to life the dream God had given Johnston-Krase.

“Ben doesn’t have the farming background, but he’s a woo [winning others over] guy with great charisma, he inspires people,” says Brimer.

“Brandon has this wild-eyed justice community organizing sense about him, to transform the world.”

The vision for Farm Church was taking form. It would be organized not around a steeple, building, or neighborhood, but around worship and the mission of food justice, food security, and sustainable living. 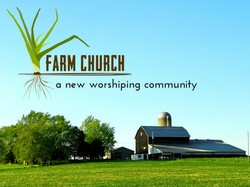 New church in a new way for the spiritually hungry who are skeptical of religious institutions, that feeds people in the community together—physically, spiritually, and nutritionally.

When he told First Presbyterian Church in Racine of his decision, they gave him a three-month sabbatical (starting March 1). They also agreed to pay his healthcare through the end of June.

With a sense of blessing from the church that was now working together with him for it to take off, Johnston-Krase has been laying out the full vision for Farm Church in places like New York, Iowa, Milwaukee, Indiana, and Louisville.

Places where there is interest from presbyteries and those in the community to explore possible ways to create Farm Church in their part of the country.

“Farm Church doesn’t have a home yet,” says Brimer. “So if you’re retiring from a farm, and no one in the family wants to farm—or if you’re a member in a church that has a small farm, talk to us.”

Johnston-Krase and Brimer admit it might sound grandiose or appear brazen, but they hope to raise enough money to endow their pastor salaries—and maybe even the land space.

“Imagine when this happens,” says Johnston-Krase, “all of the money we budget for Farm Church can be given away for food security in one community, every year.”

“We’re hoping by July we have a handful of offers for Farm Church,” adds Brimer, whose last day at First Presbyterian Church in Somerset is May 31.

It’s what they talked about recently at Louisville Presbyterian Theological Seminary, where they were invited to speak to prospective students by president Michael Jinkins.

“We feel like Farm Church represents one of the most imaginative, diverse approaches to ministry, in serving God in new and different ways,” says Jinkins.

“I’m delighted that Ben and his colleagues have embraced this adventure, to see how God reaches the hearts of humanity in ways we might have not previously thought possible.”

Johnston-Krase’s home presbytery is also supporting his vision.  They’ve provided some of his early startup costs for Farm Church’s website that is being developed, and are making it possible for people to donate now to the ministry.

“People can make their checks out to the Presbytery of Milwaukee, with the note “Farm Church” on it somewhere,” says the presbytery’s executive director Craig Howard.

“We’d love for it to be here. If it ends up here, we could support it even more as mission of the presbytery.”

But right now, Howard believes that Farm Church is a “mission of our denomination” until “it finds a home.”

Austin Presbyterian Theological Seminary president Ted Wardlaw, who knew Johnston-Krase as one of his pastors at University Presbyterian Church in Austin, Texas, agrees.

“Ben’s vision of a community centered around sustainable living, is inspiring,” he says.  “He’s an amazing preacher, liturgist, pastor, and educator—but most of all a great visionary for the church.”

“I look forward to seeing this particular vision sprouting, growing, and nourishing with deep roots.”