Becoming an Earth Care Congregation Church wasn’t a radical notion for members of the First Presbyterian Church of Ithaca, New York. Its history of caring about eco-friendly initiatives goes back to the early 1970’s. One of its members, William E. Gibson, was an early strategist in the eco-justice field, an ethical code that fosters environmental activism and social justice while promoting solidarity with people and creatures and ecological sustainability. Gibson – a member of both a Presbyterian and Baptist church in Ithaca – drafted policy documents for the Advisory Committee on Social Witness Policy (ACSWP) that ultimately helped form the environmental ministries office at Presbyterian Church (U.S.A.)

“We certainly have a strong history that’s been guided by Bill Gibson,” says Brad McFall, a member of First Presbyterian’s Justice, Peace and Integrity of Creation (JPIC) committee, the church’s social and environmental witness group. “But even with our climate-friendly legacy we discovered that participation in the Earth Care Congregation (ECC) gave us additional ideas to consider implementing and helped place more focus on the JPIC committee within the congregation.”

First Presbyterian became the first church in New York state to be designated an ECC in 2011. And despite earth care being part of the church’s mindset and education efforts for so many years, there were things in the ECC criteria that the church needed to improve upon, namely energy and lighting system audits, composting and recycling programs, and nature walks for congregants.

“We have a broad spectrum of congregants, so ECC designation actually helped bring earth care issues to the entire church, not just the activists in our population,” says McFall.

Gibson contributed to some of the earth care policy documentation that was created at the highest levels of the national church, but one of his beliefs and goals was to initiate change at the local community level and within the church itself. It was in that spirit that McFall and his colleagues on the JPIC committee reached out to the larger faith community in Ithaca to try and create momentum on the issue of climate change. They were able to generate action from activist volunteers among various churches in town, which eventually developed into the Interfaith Climate Action Network.

In January, 2014 a climate justice inquiry to action initiative offered people of different faiths the opportunity care for the Earth and respond to the climate change issue. Spread out over two months, attendees could build their knowledge base and skills for addressing climate change through the development of action plans and discussion on topics such as Reducing Your Carbon Footprint, Responsible Investing for Climate Justice, the Food-Climate Connection and Policy Advocacy for Climate Justice. 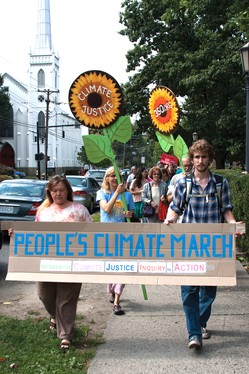 The Ithaca Climate March & Response was held in conjunction with the People’s Climate March in New York City. Supporters across the globe gathered and marched on September 21, 2014 to raise awareness around climate change. —Jason Ben Nathan

A September 2014 follow-up event culminated in a local Climate March and Response. The effort supported hundreds of thousands of climate change marchers and supporters in New York and across the globe. Approximately 200 activists of varying faiths marched in Ithaca, helping to fulfill the Gibson dream of creating change at the local level.

“God is both a redeemer and a creator, and earth care is a way to ground your faith in other aspects of your life. It’s an integral part of our worship and fellowship mission, so we’re pleased when others get as excited as we do,” says McFall. “It really benefits the whole community when you can form a bond of faith worshipers into a common goal.”

The September event resulted in 125 new volunteers committed to contributing their time and skills toward ongoing climate action initiatives. The Interfaith Climate Action Network meets quarterly, and is gauging interest in creating a Power Purchase Agreement that will look into developing solar power as an energy resource for various churches in town. Fifteen churches are currently participating in the effort.