Home News 'GO' is the focus for 2016 Presbyterian Youth Triennium

'GO' is the focus for 2016 Presbyterian Youth Triennium

To prepare 5,000+ young people to 'take their next steps of faith' when they GO home 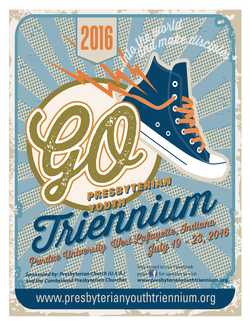 Organizers for Presbyterian Youth Triennium have announced their theme for the 2016 event, with one word—“GO.”

“We felt God leading us to help some 5,000 young people take their next steps of faith,” says Gina Yeager-Buckley, Triennium director and associate for Ministries with Youth in the Presbyterian Mission Agency.

“To focus not on the event itself, which we like to call ‘the greatest five days,’ but on what happens to them after the Triennium, as they ‘GO’ back into the world.”

From opening worship on, the 2016 Presbyterian Youth Triennium will explore “GO” in a daily “thematic mapping” through various experiences of people in scripture, such as:

Yeager-Buckley says each of the four Triennium ministry teams for 2016(Worship, Small Groups/Recreation, Community Life, and Administration), has an “impact person” specifically looking for ways to drive home the “GO” message.

Ironically, the Triennium team put into practice some of its daily “thematic mapping” for “GO” during the recent controversy over the passage of Indiana’s Religious Freedom Restoration Act—and its eventual amendment to adequately ensure protection against discrimination.

The first triennium was held in 1980 at Indiana University, but from 1983 on, they’ve been at Purdue University in West Lafayette, Indiana.

“Through a webinar, we presented information to the Leadership Committee of the Presbyterian Mission Agency Board,” says Yeager-Buckley, “working through some of the theological issues with them around our theme “GO”—as it related to staying or leaving.”

Eventually, in light of Indiana’s legislative action to revise the Religious Freedom and Restoration Act, the Leadership Committee recommended, and the board approved at its spring meeting, “to reaffirm holding the 2016 Presbyterian Youth Triennium at Purdue.”

“The state’s quick action to amend this law encourages us to believe we can continue our long relationship with Purdue,” the statement read.  “Further, we commend the University for publicly assuring its unwavering commitment to nondiscrimination.”

The Leadership Committee statement (Action Item 2.D) also commended the Mission Agency staff “for its sensitivity to this politically charged issue,” while “working behind the scenes to ensure the youth and adults who attend Triennium have a safe and welcoming place to worship and witness to the love of Christ.”