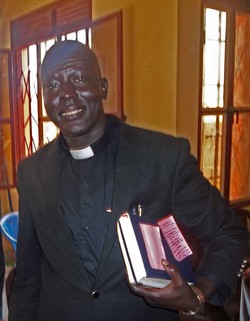 Court proceedings have begun in the Republic of Sudan for two pastors. The Rev. Yat Michael and the Rev. Peter Yen Reith of the South Sudan Presbyterian Evangelical Church were detained without charge in December 2014 and January 2015, respectively. In a May 4 hearing the pastors were charged under Sudan’s Criminal Act of 1991 for offenses ranging from undermining the constitutional system or endangering the unity and independence of the country to espionage and blasphemy.

Michael, 49, was detained by Sudan’s National Intelligence and Security Service (NISS) on December 14, 2014, at the end of a service at Bahri Evangelical Church in Khartoum. On January 11, 2015, Reith, 36, was detained by the NISS after attending a prayer meeting in Khartoum.

“This is not ‘something new’ for our church,” says the Rev. Tut Kony, pastor of the South Sudan Presbyterian Evangelical Church. “Almost all pastors have gone to jail under the government of Sudan. We have been stoned and beaten. This is their habit to pull down the church. We are not surprised. This is the way they deal with the church.”

Stated Clerk Gradye Parsons and Heath Rada, moderator of the 221st General Assembly (2014), sent a letter to Ambassador Donald Booth, U.S. special envoy for Sudan and South Sudan, to urge him to pursue diplomatic channels to learn more about the detainment of the pastors and to ensure their human and civil rights are respected fully. The PC(USA) has also reached out to human rights organizations to encourage them to take action to secure the pastors’ release and to urge the government of Sudan to respect diversity and protect religious freedom for all its people.

The PC(USA) and church partners in Sudan and South Sudan have issued a call to prayer for the pastors’ safe release. The pastors face multiple charges, some of which are deemed crimes against the state. As such, if convicted, they could face life imprisonment or the death penalty, or lesser punishments including a jail sentence, a fine, or 40 lashes.

A PC(USA) action alert states that the Sudan Presbyterian Evangelical Church and other churches have faced significant challenges caused by decades of civil war and its aftermath. These challenges have increased since South Sudan became an independent country in 2011. Christians in Sudan are now a tiny minority of the total population.

Several Catholic and Protestant church buildings in the Khartoum area have been destroyed or confiscated by authorities since South Sudan’s independence in 2011. According to the action alert, such attacks on church property represent an effort to intimidate the community and to suppress religious freedom,.

Christians in Sudan and South Sudan have asked other to pray for:

“We are trusting God,” says Kony. “They have spent five months in jail and if it exceeds to a year we still know that God will intervene, and they will be released because they did not commit any crime.”

Michael and his wife, Mary, have two children ages one and three. Reith and his wife, Martha, have a one-year-old daughter. Reith is in charge of the SSPEC orphan center in Bor, South Sudan.