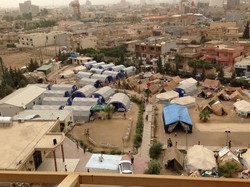 Winterized tents on the grounds of the Chaldean Church in Erbil, Iraq, house displaced persons fleeing the advance of ISIS in Mosul and other northern cities. —Scott Parker

The Chaldean Archdiocese of Erbil, Iraq, has experienced a significant makeover in less than nine months.

Fr. Douglas Bazi has been assigned to the Erbil Chaldean congregation since shortly before August 2014. Up to that time the church property boasted a large garden area that provided a spectacular view for guests at the Karlovy Vary Hotel across the Street.

The Church garden—and the property as a whole—has been transformed to accommodate over one hundred families who lost their homes and their city when group calling itself the Islamic State (ISIS) overtook Mosul in the summer of 2014.

Chaldean Christian families were not the only ones seeking help. Sunni Muslims, Shiite Muslims, Yazidis and Christians from other denominations—all driven out by ISIS—were given refuge by the Chaldean Church.

Since that first day, many things have changed.

By September 2014, about 260 families resided on the church property. To create a hospitable space, shrubbery and statues were removed to accommodate tents, bathrooms and cooking space. “It was clear that we needed to offer our whole church to the effort—our schools, facilities, everything,” said Bazi.

As the months progressed, it became apparent that the displaced families would not be returning home anytime soon. The standard tents were replaced with winterized ones provided by Samaritan’s Purse.

Today, what was once a sprawling garden is now a campus of semi-permanent trailers interconnected by brick walking paths. One hundred and ten families currently reside on the church property, while many others stay in local apartments rented by the diocese.

“But, they prefer to stay here,” states Bazi, referring to the church site.

In addition to living accommodations, the site boasts classrooms, a kindergarten, a library, a computer lab and a music room complete with a full selection of traditional and modern instruments. As evening approaches, the campus becomes alive with activity. Live music plays as adults socialize in the outdoor common area, youth gather on the volleyball court, and merchants sell vegetables and other needed items outside the front gate.

During the day, the classrooms are open to keep students progressing through the academic year. After homework is done, young people are kept busy with classes in music, dance, drama and language instruction. Courses in French, German and English are offered as a means of preparing displaced people to more quickly acclimate to the various locations where they may relocate.

“We never stopped teaching here,” Bazi emphasizes, aware of the need to provide more than simply food and shelter.

The Presbyterian Church (U.S.A.) is providing relief support for displaced persons in Iraq through its partnership with ACT Alliance and other organizations.