Elona Street-Stewart installed as Synod of Lakes and Prairies executive

Special to Presbyterian News Service - May 5, 2015 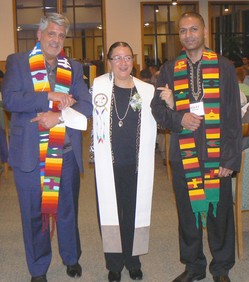 The Revs. David Maghakian, left, and Risley Prakasim, right, issued the charge to Ruling Elder Elona Street-Stewart, center, who became the first American Indian to be installed as a synod executive in the PC(USA). —Duane Sweep

Following her election last fall, Elona Street-Stewart was installed as the executive of the Synod of Lakes and Prairies on April 26. She becomes the first American Indian to serve in that capacity in the Presbyterian Church (U.S.A.)

The installation was culturally diverse and unique in many ways–featuring a Native American drum group, a Kenyan choir, a Pendleton blanket and a presentation of traditional gifts.

A ruling elder and a longtime staff member who has served in the synod since 1994, Street-Stewart was elected as synod executive in October and had been serving as executive since Jan. 1. Before taking the position she had been the synod’s associate for racial ethnic ministries and community empowerment.

The installation was held in the chapel of Mt. Olivet Conference and Retreat Center near Farmington, Minn. The evening featured three installations, including Street-Stewart’s, and cross-cultural worship components. In addition to Street-Stewart’s installation, the synod installed Paige Loveall, teaching elder commissioner from the Presbytery of Milwaukee as its moderator, and Fern Cloud, ruling elder commission from Dakota Presbytery as its vice moderator.

After the drum called commissioners and guests to worship, the Rev. Denise Dunbar-Perkins, moderator-elect of the Presbytery of the Twin Cities Area and a well-known speaker, teacher and worship leader, preached on the selection of David as Israel’s new king (1 Samuel 16:4-13) and the casting out of the demon from the Canaanite woman’s daughter (Matthew 15:21-28), using King David’s unlikely selection to point out “the Lord does not see as mortals do.”

An American Indian drum group provided the music for the processional and recessional at the services of worship and installation at this week’s meeting of the Synod of Lakes and Prairies. —Duane Sweep

Addressing the traditional conflict between the Israelites and Canaanites, Dunbar-Perkins said the demon could have been the outcast status of the Canaanites–“the demon of being invisible because you are the other.”

She continued by highlighting the need to address poverty, racism, intolerance, homophobia and other “demons” of society, “We are called to address, head on, the obstacles in our way … Even if we do fall of the cliff, God’s going to be there to catch us.”

Issuing the charge to the synod’s executive, the Rev. David Maghakian and the Rev. Risley Prakasim, co-pastors of New Life Presbyterian Church in Roseville, Minn., offered a number of ways for Street-Stewart to engage her ministry.

Prakasim said, “May you always be the beauty of creation even though clouds are overhead.” And he called on her to “serve with energy, imagination, elegance and love.”

Maghakian said, “What you do, in word or deed, do everything in the name of the Lord Jesus – everything. Your sleeping, eating, executing, relationshipping–all that you are. Everything.”

He added, “Begin in love and end in love … and pray at the drop of a hat.” 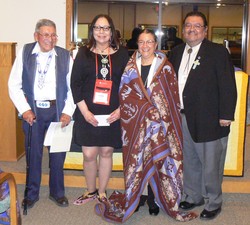 An active church leader at the national level since 1980, Street-Stewart chaired the Council on Church and Race, the Advocacy Committee on Racial Ethnic Concerns and was a member of the Relocation Committee of General Assembly Agencies following reunion of the northern and southern branches of what today is the PC(USA). She also received the denomination’s Women of Faith Award during the 219th General Assembly in 2010.

In 2001 Street-Stewart became the first American Indian elected to serve on the board of an urban school district in Minnesota. Re-elected in 2005 and 2009, she served as chair of the board and as a district director on the Minnesota School Boards Association, the Council of the Great City Schools, and the National School Board Associations Council on Urban Boards of Education.

Born in Philadelphia, Street-Stewart was an Upward Bound student at Swarthmore (Pa.) College and received her bachelor’s degree from Occidental College in Los Angeles. She and her husband, the Rev. David Stewart, have four children and three grandchildren.

Duane Sweep is the associate for communications of the Synod of Lakes and Prairies and a contributor to Presbyterian News Service.