Presbyterian artist illustrates the plight of the homeless on canvas 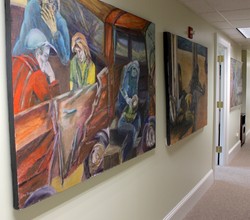 The Presbyterian Church (U.S.A.) Office of Public Witness in Washington, D.C., has recently taken on the look and feel of an art gallery. The office has been hosting a series of paintings from noted Artist Lucy Janjigian. Eighteen of her works entitled “Homeless” have been on loan to the office.

The series was painted more than 25 years ago, but is still on demand at churches and schools throughout the country. Each painting gives insight into the everyday struggles of people living on the streets.  One entitled “Shopping Cart” depicts an elderly man pushing his worldly possessions past two mothers holding closely to their small children. “In Garbage” shows an elderly woman digging through a trash basket, while “Abandoned Car” portrays several people huddled inside with a look of total despair on their faces.

“I would travel to New York City from New Jersey three times a week to the Don Stacy Workshop Studio and would see homeless men and women along the way,” said Janjigian. “It broke my heart to see them. I couldn’t help them but I could tell their story in picture to raise awareness of the plight of the homeless.”

Janjigian’s last painting in the series was “Homeless in Carton Boxes.”

“The day I started painting it I heard on the news that a truck had backed over a man sleeping in a carton box,” she said. “I was devastated when I heard that, but was determined to finish that painting to make people see and become aware of where and how some of these poor people have to live.”

Janjigian, an active Presbyterian, was born of Armenian descent in Jerusalem and attended English Mission schools. She received her B.A. in Biology from Heidelberg University and her M.S. in Plant Ecology from Emory University. But painting was her passion and spent many years studying at the Art Students League and Stacy Studio Workshop. She has been commissioned for paintings, magazine and church bulletin covers, murals and children’s book illustrations among other projects.

“Many institutions–churches, synagogues, universities and colleges have shown an interest in the paintings as a way of raising awareness in their students or congregations. These institutions were starting soup kitchens or overnight housing, and the paintings inspired them to participate,” said Janjigian.

In addition to the Office of Public Witness, the series has been exhibited at Montclair State College, Fairleigh Dickinson University, Rutgers University, Passaic College, Union Theological Seminary and others.  The exhibition will soon be on display at Jan Hus Presbyterian Church and Neighborhood House in New York City.