Community partnership provides help and hope for those in need 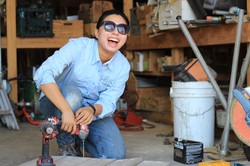 In the dry, suffocating heat of the Arizona desert, acts of grace are happening in unexpected places—on rooftops, in crawl spaces, under mobile homes.

Hanbyeol Nam is one of those volunteers. Hanbyeol, which means “big star” in Korean, is one of four Korean exchange YAV’s working in the U.S. in 2014-2015. The 22-year old, born in Busan, South Korea, is a student at Hannam University in Deajon. She hopes to use her degree in economics to help people in developing countries. Before entering her junior year, she committed to spend a year as a YAV serving with CHRPA in Tucson. Not only has she had to master plumbing and carpentry skills, she also had to learn the language and the culture.

Working for CHRPA is difficult and physically demanding. Volunteers may have to crawl through an attic inching toward 115 degrees, replace a swamp cooler on the roof of a trailer in the broiling sun or dig a trench to repair or replace a water line. But before they begin work at 6:30 a.m., the YAVs bike eight miles to the CHRPA office in south Tucson. Then, after a long day, they bike eight miles back to the house they share.

“When the YAVs arrive, many of them have never held a saw or a hammer,” says Scott Coverdale, CHRPA’s executive director. “You don’t need skills to work here, just a willingness to learn and a desire to serve. We are responding to a critical need. People are in crisis and lacking resources. A week or two without water or electricity, life begins to get harsh. We’ve been in some homes where they haven’t had water or electricity for more than a year. We can usually fix the problem in a day and that’s pretty rewarding. These aren’t broken pipes, these are people. This experience is an extremely human one.” 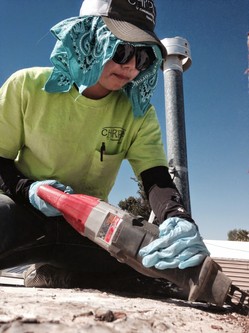 Coverdale says he’s seen Hanbyeol’s technical skills grow dramatically, but more importantly, he says it has been fun to watch her grow and develop as a person.

“She is a gifted person with high aspirations that don’t include plumbing,” he says with a smile, “but the skills she has learned have taught her how to be a better communicator and given hear a much broader view of the world and how people live. It’s been really good for her. It’s given her a lot of confidence.”

Brandon Wert, the YAV site coordinator in Tucson for more than a decade, says he knew the first day that Hanbyeol was going to do well. She jumped in immediately and wanted to learn. “Hanbyeol is unique and a standout among people her age, here or in South Korea. She has an openness that is infectious. She is tenacious and outspoken, finding her voice and her power.” He says she spent time learning and talking to the other YAVs, engaging critically and broadening her mind on issues of theology.

Wert is leaving as the site coordinator to move with his family to Singapore, where his wife will work in early childhood education. He says he’ll carry some important lessons learned from Hanbyeol. “When I think about all the cultural differences I will be experiencing, I just think, ‘do it like Hanbyeol.’”

Hanbyeol says her mantra since arriving in Tucson is: “I can do. I can do it.”

Hanbyeol credits her housemates with the love and patience to grow and practice her English. She says they gladly repeat things over and over and help her understand the cultural contexts of comments people make. She is particularly grateful to Allie Gosselin, a fellow YAV and housemate, who befriended her and even invited her home to Dothan, Ala., for the holidays.

Gosselin says Hanbyeol has been both a student and a teacher. “I thought moving here would be hard for me and a culture shock, but it really puts things into perspective when she asks things like ‘Why do you eat like that?’ or ‘What does that joke mean?’ I had to sit down with her and go over normal, everyday conversations. It really humbled me to see how she was learning everything from the bottom up.”

Allison Wood was a YAV with CHRPA in 2010-2011 after graduating from college. She is the new Tucson YAV site coordinator, taking over for Wert and mentoring the current YAV’s and sharing her experiences.

“The YAV program completely changed my life,” she says. “It has taught me how to be an active agent for justice in God’s kingdom. Many people are looking for a way to investigate more fully who they are and what they believe. Being a YAV pushed me to be more authentic and to think really deeply about everything, about who I am, about what I believe, about the way the world is and the way I would like it to be.”

Young Adult Volunteers is a service and leadership development program through World Mission PC(USA). Young adults serve for one year in the U.S. or internationally and have the opportunity to experience Christianity in a new culture. YAVs are between ages 19 and 30. There are a limited number of spots available for the 2015-2016 year of service. For more information, please visit www.youngadultvolunteers.org.