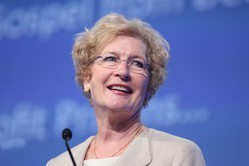 When Linda Valentine got a phone call nearly ten years ago asking if she would be interested in applying to become executive director of what is now the Presbyterian Mission Agency (PMA), she listened hard for God’s call.

At first, Valentine thought to herself, “There’s no way,” but when she later woke up every morning hearing a voice say to her, “Of course you’re going to do this; it’s where your life has been leading,” her path became clear.

Today the longest-serving executive director of the PMA and its various predecessor organizations—whose election was first confirmed by the 217th General Assembly (2006) and again by the 221st General Assembly (2014) for an unprecedented third term—announced her resignation from that position effective July 10.

Valentine also made history as the first woman to serve as the PMA’s executive director.

Her decision—which she shared with employees in a meeting this afternoon—came at her own initiative, following what she described as a period of prayer and discernment, in which she again heard God’s voice calling her, this time to conclude her season of leadership of the Presbyterian Mission Agency.

“From the beginning, I have had tremendous energy for this role,” said Valentine. “Lately, I have been reflecting deeply and prayerfully on my life and where God is calling me now. And now my call is clear, it is time for me to move on into a new season of life.”

In April, the board of the Mission Agency received a report of an independent investigation.

“My decision has little to do with recent events,” Valentine said. “It’s much more about my sense of call. It was important that I continue leading the agency over the past few months.”

An attorney and chief executive with over 35 years of experience in corporate and not-for-profit organizations, Valentine is a ruling elder and a former member of Fourth Presbyterian Church, Chicago, where she served briefly as interim staff coordinator. Valentine, who celebrated her 65th birthday in March, is currently a member of Highland Presbyterian Church in Louisville, having also served as an active elder there.

“Serving the Mission Agency and the church has been a privilege,” Valentine said in her announcement to staff. “I have witnessed God at work through faithful Presbyterians and partners in a myriad of ways: transforming lives, giving voice to the voiceless, hope to the despairing, opportunity to the disadvantaged, justice to the oppressed, and the love of Christ to the lost and lonely. I treasure this time of service and I am exceedingly grateful to have ministered with talented, faithful, and committed colleagues in the Mission Agency and the other agencies and parts of the church. My colleagues have been, and continue to be, a blessing to the church and all whom we serve. I am proud of what we have accomplished.”

Valentine, who has called her life one of “faith in action,” has often shared with her colleagues across the Presbyterian Church (U.S.A.) that she embraced the role of executive director as her “calling,” a word that is often misunderstood by the church as reserved for teaching elders (ministers) only.

“Linda Valentine is a committed person of faith who loves the Lord and the PC(USA),” said Ruling Elder Heath K. Rada, Moderator of the 221st General Assembly (2014). “She has given sacrificially of her time and talents to find ways to build up our Mission Agency and to enhance relationships between the various agencies of the denomination and beyond.”

In a written statement, the Rev. Marilyn S. Gamm, chair of the PMA Board and transitional executive presbyter of the Presbytery of Riverside, characterized the PMA’s accomplishments during Valentine’s tenure as “widespread and diverse.”

“After nine years of energetic, imaginative and dedicated service to the Presbyterian Mission Agency, [Executive Director] Linda Valentine today announced her resignation,” said Gamm. “We are so grateful for Linda’s many years of faithful service to the Presbyterian Mission Agency and the greater church… With the engagement of key stakeholders, Linda and her leadership team have reshaped the Mission Agency from one that does mission on behalf of the church to one that ‘inspires, equips and connects’ the church to serve Christ in the world.”

Rev. John Buchanan, Moderator of the 208th General Assembly (1996) and Valentine’s former pastor at Fourth Presbyterian, affirmed Valentine and her husband Chris as “the kind of smart, committed, strong and courageous leaders that made me always proud to be a Presbyterian.”

He also commended them as outstanding parents and citizens.

“Linda and Chris have also been extraordinary parents,” Buchanan said, “always finding ways to live a very active life and to keep their attention riveted on the basics of family love.”

Rada said that Valentine’s decision to resign—“to allow the Holy Spirit to direct us with different leadership into a new future”—is a “witness to and statement of grace, of love, and one for which we should all express our gratitude.”

“It’s time for the organization to have a leader with new enthusiasm and imagination to lead forward and for me to go where God calls me,” said Valentine.

The Rev. Gradye Parsons, Stated Clerk of the General Assembly of the Presbyterian Church (U.S.A.), has served with Valentine since he was first elected to that position in 2008.

“Linda has been a very good working partner in ministry,” said Parsons. “She has been a great cheerleader for all of the ministries of the church, which I have appreciated. She has also been generous in sharing the gifts of her vast experience as a ruling elder in working with complex situations at a very challenging time in the life of the PC(USA).”

As Valentine concludes her leadership of the PMA, Gamm called upon the church to express its appreciation to her for her nine years of faithful service.

In her statement, Gamm said that the PMA Executive Committee is now beginning the process of taking all steps necessary to ensure there is appropriate temporary leadership in place on July 11, 2015.

“As quickly as possible we will establish a position description and seek an Interim Executive Director,” she said.  “We ask for your prayers as we discern the person or persons God is already calling to serve during this interim time.”

Valentine said it’s time for the organization to move forward.

“The timing is right,” she said, “for new leadership to shape and lead the agency in good and faithful directions.”

Read Valentine's announcement in its entirety and watch the video.