Community comes together to minister to families 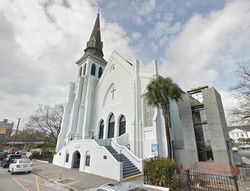 The Rev. Alonza Washington was in the middle of Vacation Bible School at Wallingford Presbyterian Church in Charleston, S.C., when he heard about the shooting Wednesday evening at Emanuel African Methodist Episcopal Church just down the street. Three men and six women were gunned down while attending prayer meeting. A 21-year-old white male, Dylann Storm Roof, has been arrested.

For Washington, the shooting was personal.

“I knew the pastor, Rev. Clementa Pinckney very well. We were good friends and colleagues,” said Washington. “I’ve worshipped at Emanual, preached there and our congregation has family there.”

Washington knows all too well how to respond to crises in a community. The pastor serves as part of the Presbyterian Disaster Assistance National Response Team. The NRT is called upon in times of natural and human-caused disasters.

Like many Charleston ministers, Washington was at Emanuel Thursday morning to pray with and minister to family members and others who gathered at a prayer vigil to remember the nine victims. The pastor said there was an overflowing crowd of clergy, elected officials and others speaking out against gun violence and the need for whites, blacks, poor and wealthy to speak with one voice.

“What really echoed to me is that despite this evil act, God is going to raise us up and help us stand together,” Washington said. “Our legislature has not done a good job of raising the consciousness toward gun violence. The legislators attending the vigil say we are going to have to change that.”

Despite the knowledge that it was likely a “hate crime”, Washington said he has already seen many signs that give him reason for hope, including a young white mother bringing her daughter to leave flowers at a memorial outside the church building.

“To see a young mother talking to her child about what has happened gives me great hope that despite the tragedy, we can heal,” he said. “It’s going to take our young people, both white and black, to join together in love and unity.”

PC(USA) leaders offered a prayer saying “...we pray for an end to the continued racial unrest and violence that permeates the United States and the world, and ask you (God) to guide us to work earnestly for change.”

Washington says ministers and other interfaith organizations will be meeting in the days and weeks to come to work on ways to bring community groups together. City officials have established a “Mother Emanuel Hope Fund” to assist families with funeral expenses.

“My hope is God will use this incident to encourage the church to stand up and draw people together. There must be peace and justice and we must seek to live in the right relationship with God and one another.”