At first glance, it seems odd that in this country where 80 percent of the population acknowledges being an agnostic or an atheist, people take July 6 off work to honor one of their national heroes, Jan Hus. The since-exonerated Catholic priest turned Protestant reformer was convicted of heresy by the Papal Council of Constance in Germany and burned at the stake as punishment.

This year marks the 600th anniversary of his execution. The celebration, co-hosted by the Evangelical Church of Czech Brethren (ECCB) and the Hussite Church, lasted two days and nights. Festivities were held mainly in the cobblestone beauty of the Old Town section of Prague, the former seat of the Holy Roman Empire.

Sunday, July 5, began with worship services all across the country, including a communion service at Husův Dům—Hus House or, in this usage, Jan Hus Church—the ECCB congregation in Hvozdnice. Its pastor, Vendula Kalusová, also serves the 30 surrounding communities in the rural area roughly 45 minutes from Old Town.

Early afternoon festivities in the city featured a ceremony in the original Husův Dům, Betlémské Kaple (Bethlehem Chapel.) Broadcast live on Czech TV, a tower bell cast for the occasion, new artwork and a pair of ceremonial plaques were dedicated—one to be mounted in Constance.

The threat of rain didn’t deter a healthy crowd from gathering as the formal HusFest 2015 programming kicked off with the Moravian Symphony Orchestra, several choirs and a pair of soloists performing an evening of music by Czech composers Smetana and Dvořák.

The musical highlight of the festival was the world premiere of Reformation concertino, composed by Ladislav Moravetz expressly for the weekend’s commemoration. The climax of the event occurred during Dvorak’s Te deum laudamus with the sudden appearance of the sun that cut through the cloud cover during the lyric “in gloria patris…” It’s not hard to imagine Jan Hus embracing the irony of the use of Latin in music written by a Czech to honor a Czech man executed in part for fighting for the use of the Czech language in church instead of Latin. 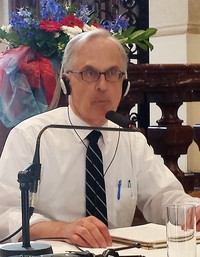 Parades, street theatre, tours and “medieval and modern” souvenir kiosks were in full swing July 6, as were day-long explorations of the “Historical Hus” at the ornately frescoed Hussite Church of St. Nicholas and the “Contemporary Hus” at the ECCB’s historic and elegant Church of St. Martin in the Wall, which dates to 1178. The interior walls of St. Martin’s in the Wall were decorated with Mir Peace, an international and ecumenical art exhibition by children through high school age.

American scholar Thomas Schwanda, a Hussite minister and Wheaton College professor, delivered a paper examining “The Protestant Reception of Jan Hus in Great Britain in North America.” Schwanda called Hus unique in that Protestants from many persuasions—puritans, evangelicals, Baptists, Quakers, progressives— “claim Hus as their own.”

While the final in-town celebrations honoring Jan Hus included food distribution to Prague’s homeless and a silent candlelight vigil, perhaps the most significant conclusion occurred on the grounds of Barokní areál Skalka, the summer retreat of the Roman Catholic bishop whose diocese shares the same region around Hvozdnice s Husův Dům. 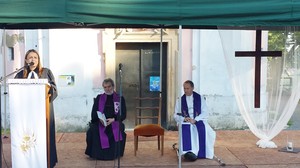 For the first time ever in this region, an ecumenical prayer service was concelebrated by a Catholic bishop, Jan Dlouhý; a Hussite priest, Rudolf Valenta from Praha-Zbraslav; and an ECCB pastor, the Rev. Vendula Kalusová of Husův Dům.

The simple service was held on an outdoor stage in front of Mary Magdalene Chapel and featured a pair of significant symbols: a woman prelate on equal footing with her male concelebrants and Husův Dům’s plain wooden cross displayed where a Catholic crucifix usually hangs. The choir from Kalusová’s church supplied the music, generating a rousing, full-throated rendition of Jednou budem dál (We Shall Overcome) from the approximately one hundred participants that made the trek up the winding mountain road. The U.S. civil rights anthem was also sung during Czechoslovakia’s anti-communist era.

Jim Nedelka is a contributor to Presbyterian News Service. He is a member and ruling elder at Jan Hus Presbyterian Church in New York City where they are celebrating a century of help and service to the community by the church’s Neighborhood House.